Norway is boosting the flood defences of its Global Seed Vault on the Arctic archipelago of Svalbard after water entered the entrance tunnel last year. 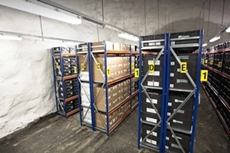 The Svalbard Global Seed Vault, a gene bank built underground on the isolated island in a permafrost zone some 1,000 km from the North Pole, was opened in 2008 as a master backup to the world's other seed banks.

Samples from seed collections around the world have been deposited in the world's largest repository, deep inside a mountain, to safeguard against wars or natural disasters wiping out global food crops.

But now it is under threat, as unseasonably high temperatures last year caused the permafrost to melt, sending water into the access tunnel. No seeds were damaged but the facility is to have new waterproof walls in the tunnel and drainage ditches outside.

The vault stores seeds from crop species from around the world. Dried and frozen, it is believed they can be preserved for hundreds of years. Although most countries keep their own supplies of key varieties, the Global Seed Vault acts as a back-up.

Scientists at the facility describe the vault as the most important room in the world. If a nation's seeds are lost as a result of a natural disaster or a man-made catastrophe, the specimens stored in the Arctic could be used to regenerate them.

For example, in September 2015, Syria's civil war prompted the first withdrawal of seed deposits from the vault. The seeds, including samples of wheat, barley and grasses suited to dry regions, were requested by researchers elsewhere in the Middle East to replace seeds in a gene bank near the Syrian city of Aleppo that was been damaged by the war (See: Syria conflict prompts first withdrawal from doomsday seed bank).

Norwegian government spokeswoman Hege Njaa Aschim told the BBC that the reason the vault was built on Svalbard was because the permafrost was thought to be permanent.

She said the problems emerged last October when the temperatures, instead of being -10C or colder, were hovering around 0C.

"It was like a wet summer in Norway," she said.

"Inside the mountain it's safe but the problems we have experienced are just outside and in the front of the tunnel, which is the entrance. So yes, maybe something has changed in the permafrost, but we don't know, and that is what the climate researchers are looking into. We have to follow them carefully."

The new measures announced include drainage ditches on the mountainside to stop water from accumulating around the access tunnel, while waterproof walls inside the tunnel itself will provide extra protection for the vaults.

In addition, Statsbygg, the agency that administers the vault, is to carry out a research and development project to monitor the permafrost on Svalbard.