Union Budget 2021-22 will be delivered in paperless form for the first time and, hopefully, finance minister Nirmala Sitharaman may not have to carry with her the usual papers containing the budget speech to Parliament this time. 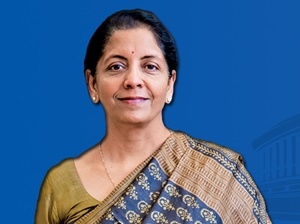 The Union Budget 2021-22, which will be presented on 1 February 2021, would also be vastly different from former budgets, and with the cont inued down-trend of the economy due to COVID-19, the expectation is that the budget would usher in some bold new changes.
Ahead of the presentation of the Budget, finance minister Nirmala Sitharaman also launched the `Union Budget Mobile App’ for hassle-free access of Budget documents by Members of Parliament (MPs) and the general public using the simplest form of digital convenience. The mobile App facilitates complete access to 14 Union Budget documents, including the Annual Financial Statement (commonly known as Budget), Demand for Grants (DG), Finance Bill etc as prescribed by the Constitution.
The App has a user-friendly interface with embedded features of downloading, printing, search, zoom in and out, bidirectional scrolling, table of contents and external links, etc. It is bilingual (English & Hindi) and will be available on both Android and iOS platforms. The App can also be downloaded from the Union Budget Web Portal (www.indiabudget.gov.in). The App has been developed by the National Informatics Centre (NIC) under the guidance of the Department of Economic Affairs (DEA).
The Budget documents will be available on the Mobile App after the completion of finance minister’s budget speech in Parliament on 1 February 2021.
While the expected rebound in revenues may give some leeway for the finance minister in Budget allocation, a revenue deficit of 3.5 per cent of GDP and a fiscal deficit of around 5 per cent of GDP for the government in FY2022 may give way to prioritising expenditure.
And, since Budget 2021 is being prepared and presented at a time when the Indian economy is struggling to come out of the historic recession, the possibility is that the Budget would depend heavily on facilitation and less on allocation.
FY2022 is expected to bring about a double-digit GDP expansion, as well as a rebound in government revenues . The government should the revenue gains to reduce the fiscal deficit to a level that can be financed comfortably by the markets, and prioritise spending on growth areas.
Still, the budgetary outlay for the rollout of the Covid-19 vaccines programme will continue to dominate government spending. But, once the pandemic subdues, such spending will boost investor and consumer sentiment and nudge decision-making. The faster the vaccine rollout gathers traction, the quicker behaviour will revert to normalcy in economic activity.
The current situation does not leave much room for giveaways and nothing much can be expected by way of tax concessions.
However, the start-up ecosystem is pinning hopes on the budget for a boost with some of the much-anticipated tax-related reforms from the start-up perspective. These also include a reduction in tax liability.
Although companies in the start-up space are generally cash-burning/loss-making, and do not have much tax liability at the end of the tax year, this aspect is ignored while withholding taxes on payments made to start-ups. Withholding of payments and blockage of cash flows causes liquidity constraints to start-ups as cash is refunded only on completion of tax assessments.
Easing out such cash blockage by relaxing such withholding tax obligations on payments made by start-ups is expected, as it would provide much relief and liquidity to the start-up fraternity.
Also, the government had, in the Finance Act 2020, introduced TDS on ‘e-commerce’ transactions and TCS provisions for collection of tax on ‘sale of goods as a measure to widen and deepen the tax net. However, ambiguities persist regarding the scope and ambit of these tax regimes, and certain types of transactions could be subjected to both tag regimes, that brings about a cascading effect of taxes.
The Union Budget 202122 is expected to ain at achieving a balance between reducing the fiscal deficit to a level that can be financed comfortably by the markets, and prioritising spending on those areas that will boost confidence and growth
However, capital expenditure and infrastructure spending should be accorded as much priority as feasible within the budgetary constraints.
Also, the budget should ensure pending subsidies and other governmental dues are released expeditiously, and that they are paid as they accrue in the next fiscal year. Clearance of any arrears, pending dues to contractors and vendors, as well as expediting any tax refunds will help put valuable resources in the hands of corporates and individuals and go a long way in improving the sentiment in the economy by driving investment and consumption.
MORE REPORTS