In a setback to the central government, the Arvind Kejriwal-led AAP government in Delhi got a respite after the Supreme Court today said it had powers to legislate and administer all areas except land, police and law and order even as it held state cannot claim statehood like other states. 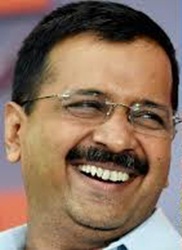 A five-judge Constitution Bench delivered its verdict on the Delhi government’s appeal challenging a HC judgment holding the LG as the administrative head of the Capital (See: Delhi HC verdict junks Kejriwal govt, says Jung is King).
The Supreme Court has pronounced its verdict on the tussle between the Arvind Kejriwal-led Aam Aadmi Party (AAP) government and the central government-appointed Lieutenant Governor (LG) over who wields the power to administer and govern the national capital.
A five-judge Constitution Bench, headed by Chief Justice of India Dipak Misra ruled that the Delhi government has power to legislate and administer in all areas except land, police and public order and that the LG is bound by the aid and advice of the government in all other areas.
The verdict, pronounced on the Delhi government’s appeal challenging a HC judgment holding the LG as the administrative head of the national capital gives some respite for Delhi’s harassed chief minister Arvind Kejriwal and his AAP government.
The Delhi BJP has welcomed the Supreme Court verdict on the power tussle involving the office of Lt Governor and the AAP government, and said the ruling party should now shun its “political demand” of full statehood to the city.
BJP MLA and leader of the opposition in the Delhi assembly Vijender Gupta said the AAP government is expected to follow the apex court’s verdict and respect the law.
“We welcome the SC verdict. The Delhi government should have been following the law even without the order of the court. We hope, they will do so after the judgement,” he said.
"Now that the Supreme Court has made it all clear, there should be no excuses, just development for Delhi. Kejriwal government and LG had been kicking around Delhiites like a football. They should stop it now and get to work," Delhi Congress president Ajay Maken said.
"The role of LGs and governors and their misuse has been brought into sharp focus by today’s judgement. BJP’s charade of cooperative federalism and in reality destroying our federal structure is condemnable. LGs / Governors cannot usurp rights of an elected state government," CPI(M) chief Sitaram Yechury tweeted.
Delhi BJP spokesperson Praveen Shankar Kapoor said the verdict has “decided” that Delhi is a union territory and the AAP should stop raising their “political demand” for full statehood to the city.
MORE REPORTS