In a significant cabinet reshuffle by Prime Minister Narendra Modi late on Monday, railway minister Piyush Goyal, a former party treasurer, has been given additional charge of the finance ministry. 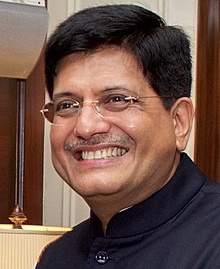 Piyush Goyal will hold additional charge of finance and commerce while Arun Jaitley recovers from an operation
The somewhat controversial Smriti Irani has been divested of the information and broadcasting portfolio, which will now be looked after by her deputy in the ministry, minister of state Rajyavardhan Singh Rathore. Irani will continue as textiles minister.
A Rashtrapati Bhavan communique said Rathore has been assigned the independent charge as minister of state in the ministry of information and broadcasting.
This is the second time that Irani has been moved from a public-facing ministry, as she was earlier shifted from the human resources development ministry to textiles.
The communique said that during the indisposition of Arun Jaitley, the portfolio of finance and ministry of corporate affairs has been "temporarily" been assigned to Goyal. Jaitley underwent a kidney transplant on Monday.
Minister of state S S Ahluwalia has been relieved of the drinking water and sanitation portfolio and assigned a new portfolio of electronics and information technology, the communique said.
Alphons Kannanthanam has been relieved as minister of state for electronics and information technology. He continues as minister of state for tourism.
Irani has often courted controversy, the most recent being her circular on fake news. The I&B ministry had issued an order with provisions for punishing journalists found involved in generating fake news. The order was widely criticised as a brazen attempt to curb press freedom. It was later withdrawn on the directive of Prime Minister Modi (See: Government scraps controversial move on 'fake news' generation amidst uproar)
MORE REPORTS