The official website of the ministry of defence was hacked earlier in the day, with a Chinese character appearing along with an error message on its homepage. 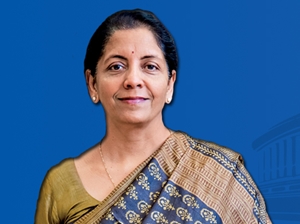 Defence minister Nirmala Sitharaman while confirming the hack within an hour of reports emerging of the website being down, said steps are being taken to restore the site and “prevent any such eventuality in the future.”
The hack of the defence ministry website seems to have spooked the central government, prompting other ministries, including home, law and labour, to take down their websites.
Whatever happened, in less than an hour after the defence ministry website was hacked, the law ministry, home ministry and labour ministry websites were found to be inaccessible, with error messages.
While it is unclear if it was done intentionally, a government spokesperson said the MHA site has been taken down to allow a security upgrade. The upgrade is being implemented by the Nation Informatics Centre (NIC), which hosts most government websites.
"Site off-line. The site is currently not available due to technical problems. Please try again later. Thank you for your understanding," read the message on the home ministry site.
“Needless to say, every possible step required to prevent any such eventuality in the future will be taken,” Sitaraman said.
Screenshots shared on Twitter showed the website earlier displaying a Chinese character meaning a loose garment as worn by monks and an error message.
However, there is no confirmation from the law ministry and the home ministry on whether their site have been taken down, or these were taken down by the ministries themselves.
Earlier in the day, the government’s computer emergency response team (CERT) had issued a notification reporting a ‘vulnerability’ in the malware protection engine, stating that it could ‘help a remote attacker to execute code on the target system’.
There has been regular attempts by foreign-based hackers to hack official Indian websites with 199 such attempts in 2016 alone, as per government data.
Over 114 government portals were hacked between April 2017 and January 2018.
Early in 2017, some miscreants suspected to be Pakistanis, hacked the website of the National Security Guard, defacing it with an expletive message aimed at Prime Minister Narendra Modi and an image of the police beating up civilians with accompanying text “Free Kashmir.”
A month later, the website of the home ministry was hacked, with the ministry having to take down the website temporarily.
MORE REPORTS