There was some difference of opinion between former finance minister P Chidambaram and IT doyen N R Narayana Murthy, cofounder and former chairman of Infosys, on Friday on the mandatory use of Aadhaar, with Chidambaram questioning the need to link it to activities ''that have nothing to do with government'', which could lead to likely intrusion into privacy, and Murthy saying it was a necessary tool to identify an individual and cannot be trashed just because ''Parliamentarians have not worked hard to produce privacy laws''. 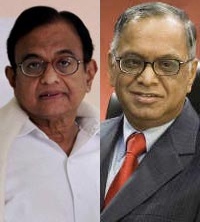 Murthy said the government should ensure there is no privacy violation and the Aaadhar database is not hacked.

Chidambaram, now again a practicing lawyer, felt linking of Aadhaar should be kept to a bare minimum. ''There is nothing wrong when there is a question of your identity or if you receive a subsidy or payment from the government. But why should I disclose my Aadhaar when I book tickets? Somebody will find a way to hack into the data and write a 360 degree profile of you. That is an Orwellian state.

''We are in a liberal democracy, an open society. If a young man and a woman want a private holiday, what's wrong with that? Why should the state know what medicines I buy, what cinemas I visit, etc? If we want to preserve ourselves as a liberal democracy, the state should not know any of these matters,'' Chidambaram said during a discussion at IIT Bombay's annual Mood Indigo festival.

Terming Aadhaar a simple verification of identity, Murthy said, ''I disagree with you. All of the things you talked about are available on Google today. I think it is time India had a certain way of identifying each individual. In every developed country, you need a social security number, there is no privacy violation. The Aadhaar database does not keep medicine data.

''You can't trash Aadhaar just because our parliamentarians haven't worked hard and produced privacy laws. The responsibility of the Parliament is to ensure nobody hacks into it. Parliament should have the authority to say in what areas Aadhaar can be used,'' he said.

Flaying the Modi government's all-out push to get everything linked to this national identification number, Chidamabaram said the "government is completely deaf" to any reasoning against linking Aadhaar to everything under the sun.

Reminding the audience that the UPA government in which he was a senior minister had launched Aadhaar, Chidambaram said, ''I stand by Aadhaar. What I'm questioning is linking Aadhaar to activities that have nothing to do with the government.''

On linking of bank accounts to Aadhaar, Murthy said, ''Bank accounts being verified by Aadhaar is a very important issue. Tomorrow, it will not be possible for someone to conduct a false transaction.''

Chidambaram countered, ''Banks have KYC (Know Your Customer) even today. Linking to Aadhaar is the first step for the government to know everything about your financial transactions. And having been in government I will tell you, I should resist the temptation of knowing about all these activities that individual citizens do.''

Chidambaram, who is yet to link his bank account with Aadhaar number, wanted the linking of Aadhaar to be put on a pause until the Constitution bench of the Supreme Court hears petitions on the issue.

''There is only one person in the country who can authorise tapping of telephones - the home secretary of India. But do you believe telephones are not being tapped by unauthorised persons? While Parliament might pass a law on privacy and data security, we should not give anyone an opportunity to tap into that data by creating a common link by Aadhaar. Linking of Aadhaar must be kept to a bare minimum,'' Chidambaram, said pointing out that the linking of Aadhaar was being done now not on a voluntary basis but because people were being flooded with mails and text messages from banks and financial firms.

On the verdict of the special court on the 2G spectrum 'scam', Chidambaram said, ''It is possible the judgment can be overturned or modified. But as it stands today, a judge known for his fierce honesty and integrity has come to the conclusion that there was no corruption or criminality in what was attributed to the accused. If we believe in the rule of law, we must accept that.''

On GST, he said ''This is not GST. GST is one rate. Eventually, GST is simply one rate. Eventually it must be simply one rate. You can't have eight rates and call it GST. You can't deny input tax credit to a number of items. You can't allow state government to impose cesses on GST. You can't have a diarchy. Some businessmen will be under the central government and some businessmen will be under the state government. And above all you can't have this fantastic nonsense of asking people to file three returns a month in every state which means if I am doing business all over India, I have to file 1,000 returns.''

On layoffs in the IT sector, Murthy said, ''These things happen. Everybody knows there are business cycles. Right now, the IT service companies have slowed down in their growth because there is a lot of investment being made in the West on technology. And they have not yet derived the benefit and therefore people are saying, let's use the investments we've made first.

He also said ''automation and AI are more hype than reality''.