Prime Minister Narendra Modi has said his government would intensify the fight against black money and corruption, even as he vowed to lead the country through a new path towards economic progress, heralding a New India by 2022. 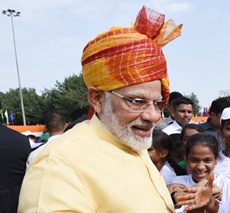 Addressing the nation on the 71st Independence Day from the ramparts of the Red Fort, he said the note ban had led to the return of Rs3,00,000 crore to the banking system. Of this, as much as Rs2,00,000 crore is under scrutiny by the Income Tax Department, he said.

He also, cited the spurt in the number of income-tax filers with 5.6 million new filers coming during April-August 2016-17 against 2.2 million in the previous year.

"More than 18 lakh (1.8 million) people have been identified whose income is more than their declared wealth," he said. "And they have to answer questions on how they accumulated such wealth."

Of the 1.8 million, 4.5 lakh people have sought to make amends for their "mistakes," he said, adding that one lakh had not paid income tax even once in the past.

''Those who have looted the nation and looted the poor are not able to sleep peacefully today. Due to this, the confidence of the hardworking and honest person is increasing. An honest man now feels that his honesty matters. Today, we are celebrating a festival of honesty and there is no place for dishonesty,'' he said.

He also said his government will take every initiative to implement the benami prohibition law, adding that till date over Rs800 crore of benami properties have become state property.

Modi said stringent action has been taken against shell companies and 1.75 lakh dormant / shell outfits have been shut in recent times.

While the closure of a couple of companies would in normal course lead to debates on destruction of the economy, no one protested after more than 1.75 lakh shell companies have been shut, he pointed out.

He cited the speedy implementation of the goods and services tax as an example of what the government and the people can achieve, given the will to do things. '' The government looks to deliver what it promises. Without reducing speed, we are taking India onto a new track,'' he said.

Removal of check posts after implementation of GST has cut time for transporting goods by 30 per cent, he said.

He had a word of praise for farmers for record foodgrain and pulses production, despite adverse weather conditions in 2016-17. He said the government had encouraged them by procuring a record 1.6 million tonnes of pulses (at support prices).

''In India procurement of pulses was not traditional (policy) and what we did was historic,'' Modi said. On the revamped crop insurance scheme, Pradhan Mantri Fasal Bima Yojana (PMFBY), launched in 2016, Modi said that over 10 million new farmers have enrolled under the scheme. ''Three years ago 3.25 crore (32.5 million) farmers had crop insurance and now 5.75 crore (57.5 million) farmers are covered,'' he said.

Expressing confidence in the efforts of the armed forces, Modi said the security of the country is of utmost importance and that India has the capability to effectively handle all forms of attacks - whether they be cyber, sea, land or even space.

The Prime Minister also announced the launch of a special portal in honour of gallantry award winners. This portal will have details and profiles of the winners.

On Kashmir, Modi invited Kashmiris to start a dialogue and join the mainstream. He said that the long-standing dispute can only be resolved with compassion. ''Na gaali se na goli se, Kashmir ki samasya suljegi gale lagane se,'' Modi said. (The Kashmir issue cannot be solved either with bullets or abuses, but only with love.)

Modi said that the centre was committed to restoring Kashmir's status as ''heaven on earth''. Along with the Kashmir government, it is also the nation's concern to develop J&K and its youth.

Stating that the youth has a big role in nation building, Modi urged those turning 18 to play the role of job creators than be job seekers.

Modi said the changes consumption demand and availability of technology combine to alter the nature of jobs and that his government wants to nurture youngsters to be job creators and not job seekers.

"We are taking the nation on a new track (of development) and are moving ahead with speed," he said, adding that the government was devoting significant attention to eastern states of Bihar, Assam, West Bengal, Odisha and Northeast.

"These parts have to grow further," he said.