In yet another setback to the Pinarayi Vijayan-led Left Democratic Front (LDF) government in Kerala, the Supreme Court today ordered reinstatement of TP Senkumar as the Kerala police chief. 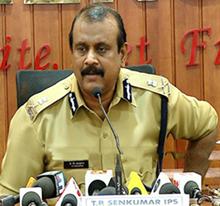 The news comes as a bigger blow to the CPM hardliner Pinarayi Vijayan who looks set to lose his power minister M M Moni after the latter blurted out offensive remarks about Kerala's famous women's front of plantation workers who led a historic strike to win their lawful rights during the UDF period.

The CPM-led LDF government had shunted out Senkumar and appointed Loknath Behra in his place, shortly after it came to power in May last year. Senkumar, however, chose to challenge the arbitrary manner in which IPS officers are treated by governments across the country.

''This fight was not personal, this judgment will help officers across India to continue doing their job with honesty and according to the law,'' Senkumar told reporters in Thiruvananthapuram.

The Supreme Court bench of justices Madan B Lokur and Deepak Gupta had held that Senkumar was ''unfairly and arbitrarily'' dealt with, while setting aside earlier orders of the Central Administrative Tribunal and the Kerala High Court upholding the state government decision and directed the government to reinstate him as the SPC.

Senkumar, who will retire in 30 June, would have to function under a government which wanted him out – a difficult thing for an officer who will have to interact with the government almost on a constant basis.

The LDF government, after assuming office in May 2016, had removed Senkumar as SPC on the grounds that the officer failed to gain ''public confidence'' in handling of two cases – the firework disaster at Puttingal temple in Kollam which killed 110 people and the murder of Jisha, a Dalit law student, in Perumbavoor near Kochi. Both incidents happened when the previous, Congress-led UDF government was in office.

Pinarayi Vijayan, who had repeatedly defended the ouster, including during debates in the legislative assembly, said the government would study the judgment in detail and act accordingly.

Senkumar is perceived in the CPM top ranks as an officer who went against the party in important cases.

Leader of the opposition Ramesh Chennithala called Senkumar an upright, sincere officer and termed the SC judgment a serious setback to the government.

The judgment comes at a time when the government is grappling with allegations of ineffective law and order systems in a number of cases and the police's handling of the UAPA.