Following allegations that electronic voting machines (EVMs) are not tamper-proof, the Union cabinet on Wednesday approved a proposal for the purchase of devices that leave a paper trail of votes cast on an EVM for use in future elections in the country. 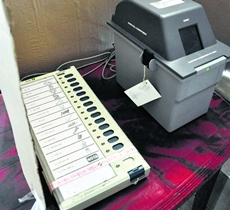 The clearance for purchase of voter-verifiable paper audit trail (VVPAT) machines was given during a meeting of the cabinet chaired by Prime Minister Narendra Modi after a brief discussion.

This comes at a time when opposition parties are demanding that the Election Commission to go back to the paper ballot and discontinue the use of EVMs.

Both the government and the Election Commission of India (EC) have denied the charge and said EVMs were completely safe.

The Supreme Court has directed the poll panel to use VVPAT machines for the next general elections in 2019 and while hearing a contempt petition, sought to know the approximate time within which the entire system could be introduced.

The commission had informed the apex court that the ''required number of VVPATs can be manufactured from the date of release of funds in 30 months as per current capacity of the two manufacturers - Bharat Electronics Ltd and Electronics Corporation of India Ltd''.

The EC had requested the government for immediate release of funds to procure VVPAT machines after opposition parties raised their pitch for abandoning EVMs for paper ballots.

In a terse letter to the law ministry, the election watchdog made an oblique reference to the scepticism over the use of EVMs by the opposition parties. ''It is felt that the process of procurement of VVPATs cannot be delayed any longer given prevailing environment,'' the commission said in its letter on 22 March.

According to the Hindustan Times, sources said it was the 11th reminder for the release of funds for VVPAT machines since 2014 to the government, though EC officials did not confirm this.

It had also reminded that the VVPAT machines have to be used for the 2019 general elections along with EVMs.

The EC had sought Rs3174 crore from the Centre for the purchase of over 16 lakh paper trail machines that allow voters to see the name and symbol of the candidate they have voted for to cover all polling stations across the country.

The results are visible for 7 seconds on a paper slip that is then recorded in the machines and can be used to verify the result shown on the EVM in the case of any dispute.

The Cabinet has so far cleared two tranches of Rs1,009 crore and Rs9,200 for the commission to buy new EVMs.

The commission needs over 16 lakh paper trail machines to cover all polling stations for the 2019 Lok Sabha elections.