Over a cup of tea on Thursday morning, Prime Minister Narendra Modi offered Bharatiya Janata Party MPs from Uttar Pradesh some advice: avoid lobbying for transfers and postings of officials, which was the bane of previous governments in the state. 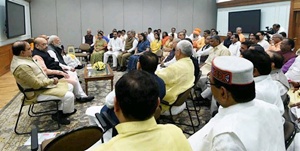 The PM also asked party MPs to avoid discrimination in development work irrespective of the poll result and support for BJP. "Rather, we should be more focused on areas where the party has lost," Modi said, suggesting that constituencies represented by opposition MLAs be allocated funds equally.

Modi spent close to two hours with the MPs from both Houses, including ministers, as he spelled out a list of "dos and don'ts" for them. The party has 71 Lok Sabha MPs and three Rajya Sabha MPs from the state.

"Refrain from lobbying for bureaucrats' transfer-posting," the PM is understood to have said and cautioned that previous governments had become notorious for this. This was a strong element in BJP's campaign attack on the Samajwadi Party and the Bahujan Samaj Party during the elections.

Ever since the change of dispensation, a buzz about a massive overhaul of the bureaucracy has become louder in a state where successive governments have looked to pick officials of their choice and political leanings are often openly flaunted.

The politicisation in the police force is reflected in instances like police officer Himanshu Kumar on Wednesday tweeting alleging mass transfer of Yadav police officers since the BJP government took over. He is facing a departmental inquiry even as his allegations prompted Samajwadi Party leader Ramgopal Yadav to raise the issue in Rajya Sabha.

Modi told MPs to allow the government to restructure the administration on merit and without political interference. The PM said there might be party workers' pressure for several works for which MPs should approach the chief minister and make suggestions as per viability.

The PM reiterated his appeal to party lawmakers about effective communication with common people about the welfare and development schemes initiated by the Centre and the state. "MPs could be the most instrumental in apprising people about the governments' initiatives," he said. Humility in public domain should be stressed after the overwhelming victory of the party.

Modi has been consistently trying to "discipline" party lawmakers as he had strong words for them during a parliamentary party meeting this week. He asked MPs to ensure presence and participation in House proceedings. Attendance in the treasury benches has increased since then. To ensure compliance, the PM has frequently attended House proceedings in the recent past.