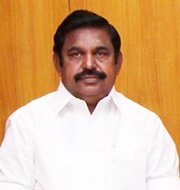 Sasikala has the last laugh, although from the prison, after her nominee Edappadi Palaniswami today won a crucial vote of confidence in a rough assembly test, winning 122 votes against 11 in a house of 234 amidst unruly scenes and demand for postponement of the vote.

Leader of the opposition M K Stalin was forcibly evicted from the house even as DMK legislators gheraoed and heckled Speaker P Dhanapal amidst high drama and bedlam in the House (See: Speaker adjourns TN assembly amidst chaos; trust vote disrupted).

The final vote was preceded by eviction of principal opposition DMK and walkout by its protesting allies, which have 98 legislators in the 234-member House.

Former chief minister Panneerselvam could muster only 11 votes, ending the prolonged stalemate triggered by his rebellion.

Despite conviction of V K Sasikala who was elected the legislature party leader, Governor Vidyasagar Rao opted to swear in her nominee Edappadi K Palaniswami as the chief minister as proposed by Sasikala.

The governor had given Palaniswami 15 days to prove his majority. But Palaniswami opted to prove majority on the very next day for fear that once released from their resort, the MLAs could defect to Paneerselvam's side.

The vote was taken after two adjournments due to pandemonium and charges of attacks by DMK members. Speaker P Dhanapal and leader of opposition M K Stalin said their shirts were torn in the fracas in the House.

Stalin immediately dashed off to the Raj Bhavan to meet the governor and complain about the incidents.

Tight security was in place outside the assembly to prevent any untoward incident in the wake of the do-or- die battle for the pro-Sasikala government. When the assembly met for the day, Speaker P Dhanapal assured the members that they would be provided proper security.

The assembly witnessed unruly scenes with the opposition members insisting on a secret vote and wanting MLAs to be allowed to visit their constituencies and meet the people before they cast their vote.

This was, however, rejected by the Speaker who went on with the floor test when the House reassembled at 3 pm. Claiming majority support, Panneerselvam, who had claimed he was forced to resign as chief minister, had met the governor twice earlier during the month.

Just hours ahead of the voting, the Palaniswami camp received a jolt when Coimbatore North MLA Arun Kumar left saying he would abstain from voting. Yesterday, MLA from Mylpore constituency here, R Nataraj had said he would vote against the chief minister's motion of confidence.

Ailing DMK supremo M Karunanidhi did not attend the proceedings. The floor test in the assembly was the first such exercise in the state in about 30 years.

Panneerselvam vowed to continue his fight against Sasikala and her family "till the time Amma (Jayalalithaa) regime is restored." The combined strength of AIADMK in the assembly is 134.