Modi may visit US this year as Trump calls, swaps invites

US President Donald Trump and Prime Minister Narendra Modi spoke on the phone for the first time last night and swapped invitations during what was described as a warm conversation. 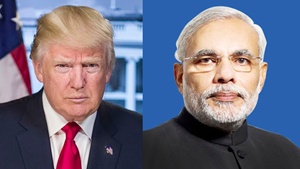 President Trump, who initiated the call, "emphasized that the US considers India a true friend and partner in addressing challenges around the world", the White House said in readout of the call. He has invited Modi to visit the US later this year. In tweets this morning, the Prime Minister said he had also invited the US President to India.

''President @realDonaldTrump and I agreed to work closely in the coming days to further strengthen our bilateral ties,'' he tweeted.

Modi is the fifth world leader that President Trump has called since taking office four days ago. The phone call took place around 11.30 pm, which is 1 pm in Washington.

The two discussed opportunities to strengthen US and India's partnership in broad areas such as the economy and defence, the White House said, adding, "President Trump looked forward to hosting Prime Minister Modi in the United States later this year."

Both leaders also discussed security in the region of South and Central Asia and "resolved to stand shoulder to shoulder in the global fight against terrorism", said the US statement.

Modi was among the first to congratulate President Trump after his stunning November election win, saying he appreciated his "friendship" with India.

President Trump, whose "Buy American, Hire American" policy and plans to clamp down on H-1B visas has caused some unease in the Indian IT industry, has so far been positive about India.

During the US election campaign, when Trump often used negative rhetoric against foreign nations, he was largely positive about India. He praised PM Modi for championing bureaucratic reform and economic growth and mentioned India as the only other nation besides Israel with which he wanted to strengthen ties.