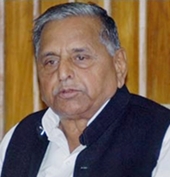 The Samajwadi Party yesterday split with the faction headed by chief minister Akhilesh Yadav removing Mulayam as party chief and appointing him in his place at a convention that the faction claimed was attended by a majority of legislators and district party heads.

Mulayam Singh Yadav, who on Saturday withdrew the expulsion of his son Akhilesh Yadav and brother Ram Gopal Yadav from the party, again expelled Ram Gopal from the party for six years and termed all decisions taken at a national convention convened by him as illegal.

Mulayam also issued a hard-hitting letter that said the national convention had not been convened with permission of the national president and so all decision taken there are illegal.

SP leaders and Mulayam Singh's brother Shivpal Yadav announced the postponement of the 5 January national convention in a series of tweets. He did not give any reasons for the abrupt cancellation of the meeting.

Sources say, the Mulayam camp was apprehensive of a poor turnout and is buying time. Almost 200 MLAs had gathered to extend support for Akhilesh at a meeting called by the chief minister immediately after the Saturday night reprisals.

Mulayam had declared a convention convened yesterday by Ram Gopal Yadav as unconstitutional, despite the massive gathering.

In what could be signs of withdrawal by the Mulam camp from an open fight, Shivpal in another tweet asked party workers to concentrate on their respective constituencies and work hard to win the elections.

Party sources while senior SP leaders from both sides (Akhilesh and Mulayam camps) are likely to visit the Election Commission in New Delhi today to put forth their case, Mulayam may not visit Delhi as he is indisposed.

The Akhilesh camp, led by Ram Gopal Yadav removed Akhilesh's warring uncle Shivpal Yadav as state party chief, and showed the door to ''outsider'' Amar Singh, who has been blamed for the feud in the Yadav clan.

Mulayam has been maintaining that Ram Gopal Yadav is misleading Akhilesh for his own political gains.