A Supreme Court bench and one of its former judges, Markandey Katju, were engaged in an unprecedented exchange of words on Friday over a blog Katju wrote criticising the apex court verdict in a brutal rape-murder case. The court issued a contempt notice to Katju for casting aspersions on the judges in his blog. 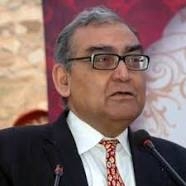 This is the first time the apex court has issued a contempt notice to one of its former judges.

Judges Ranjan Gogoi, Prafulla C Pant and Uday Umesh Lalit issued the notice to Justice Katju on why contempt proceedings cannot be initiated against him.

Giving Katju eight weeks to reply, the bench said that in the blog he had criticised the judges and not the judgment.

This was done after the bench showed a copy of the blog to Attorney General Mukul Rohatgi, who said the highlighted paragraph was "intemperate" but it did not amount to contempt.

Apparently displeased over the court decision, Justice Katju asked the bench if this was the way to treat a retired judge whom "you have invited" to the court.

He told Justice Gogoi, "You judges should learn how to behave."

Telling the bench that he was not afraid, Katju, who appeared infuriated, said, "Don't give me threats, Gogoi. Don't try to be funny with me.

"This is a free country. I have a right to say what I want. I came here on your invite and I am sorry it has come to this."

As the judges asked if there was anyone in the court to escort Justice Katju out, he retorted, "Don't try to scare me. I am not scared of you people."

As security men escorted Katju out of the court room, some lawyers present said it was wrong.

Katju was in the court over a notice issued to him on 17 October asking him to appear and explain how the court erred in the application of Section 300 of the Code of Criminal Procedure while setting aside the death sentence of a Kerala man, Govindachamy, convicted for rape and murder of a 23-year-old woman travelling on a train on 1 February 2011.

Justice Katju in his Facebook post had said that the top court had "grievously erred" in its verdict.

"Supreme Court has grievously erred in law by not holding Govindachamy guilty of murder," the former judge had said.

Advocating a review of the top court judgment, Justice Katju said on Facebook, "What the Court has overlooked is that section 300 IPC, which defines murder, has 4 parts, and only the first part requires intention to kill."

He had further said that "If any of the other 3 parts are established, it will be murder even if there was no intention to kill. It is regrettable that the court has not read section 300 carefully."

Justice Katju had said the top court erred in setting aside the death sentence merely on the grounds that the prosecution could not establish whether the woman had jumped from the train or was pushed out of it by the accused.

The top court while setting aside the death sentence had noted a doctor's opinion which said that injuries caused by Govindachamy could not alone have been the cause of the death.

Defending his position that the top court erred in reading Section 300 of the CrPC while setting aside the death sentence of Govindachamy, Justice Katju on Friday said the court should not make a distinction whether the deceased woman jumped, or was pushed out of the compartment or she had just fallen, as she was in a horrible situation.

He said that while deciding a case, besides law there has to be "common sense" also.

The breaking of the skull of the woman above her left eye, inflicting injuries up to the pituitary glands, as well as losing 13 teeth and her jumping from a running train could not be compartmentalised and seen separately, he said.

Justice Katju said the act of smashing her face against the wall of the compartment, raping her and her jumping out of the running train has to be seen as one act attributable to Govindachamy.

Attorney General Mukul Rohatgi, echoing the position taken by Justice Katju, said, "How can you say that the man is not responsible for the suicidal jump by which the lady died. The injury (inflicted on her) was very fatal.

"How can the act of causing her grievous injuries, rape and her jumping be divorced," asked the Attorney General as he urged the court to further hear the matter.

As Rohatgi supported the position taken by Justice Katju, Justice Gogoi said, "You are asking us to sentence him to death and you are yourself not sure. We have to be 101 per cent sure before we award him death sentence."

On 15 September this year, the Supreme Court had commuted the death sentence of Govindachamy in the brutal rape and murder case of the 23-year-old woman to a seven-year jail term after dropping the murder charge against him.

A division bench of the Kerala High Court had on 17 December 2013 confirmed the death sentence awarded by the Thrissur fast track court to Govindachamy, who hails from Virudanagar in Tamil Nadu.

According to the prosecution, the incident took place when the woman, an employee of a Kochi shopping mall, was travelling in a ladies coach on the Ernakulam-Shoranur passenger train on 1 February, 2011 and was attacked by Govindachamy and allegedly pushed off the slow-moving train.

He had jumped off the train, carried the injured woman to a wooded area near the track at Vallathol Nagar, and raped her.

The woman succumbed to injuries at the Government Medical College Hospital, Thrissur, on 6 February 2011.