US flags abuses by police, security forces in India

Abuses by police and security forces are the most significant human rights problem in India, the US said today while raising concerns over the "failure" of the Gujarat government to hold accountable those responsible for the 2002 riots in the state. 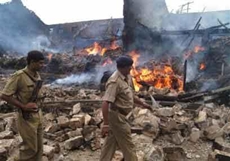 "The most significant human rights problems involved police and security force abuses, including extra-judicial killings, torture, and rape; corruption remained widespread and contributed to ineffective responses to crimes, including those against women, children and members of scheduled castes or tribes; and societal violence based on gender, religious affiliation, and caste or tribe," the US State Department said in its annual 2015 Country Reports on Human Rights Practices.

The report was released by Secretary of State John Kerry at the headquarters of the State Department in Washington.

"The frequently grim examples detailed in this report strengthen our resolve to promote fundamental freedoms, to support human rights defenders and to document and promote accountability for violations of human rights," Kerry wrote in the preface of the report.

In its detailed Congressional-mandated report on India, the State Department continues to raise its concerns about the victims of Gujarat riots not receiving justice so far.

"Civil society activists continued to express concern about the Gujarat government's failure to hold accountable those responsible for the 2002 communal violence in Gujarat that resulted in the deaths of more than 1,200 persons, the majority of whom were Muslim," the report said.

"On September 16, the Gujarat High Court's acting Chief Justice assembled a new bench to hear the appeals from Maya Kodnani, Babu Bajrangi, along with others who authorities had sentenced to imprisonment for their role in the 2002 Gujarat riots. This was the fifth bench to hear these petitions," the State Department said.

In its report, the State Department alleged that "lack of accountability" for misconduct at all levels of government persisted, contributing to widespread impunity.

Investigations and prosecutions of individual cases took place but lax enforcement, a shortage of trained police officers and an overburdened and under resourced court system contributed to infrequent convictions, it said.

"Separatist insurgents and terrorists in Jammu and Kashmir, the northeastern states and the Maoist belt committed serious abuses, including killings of armed forces personnel, police, government officials and civilians. Insurgents were responsible for numerous cases of kidnapping, torture, rape, extortion and the use of child soldiers," the report said.

The report said court backlogs delayed or denied justice, including through lengthy pre-trial detention and denial of due process.