In a bid to boost India-UK economic ties, Prime Minister Narendra Modi on Thursday left  for a five-day trip to Britain and Turkey beginning Thursday. 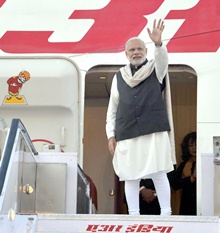 The visit is aimed at ramping up trade and investment and deepening ties in defence, security and clean energy sectors.

Stepping up cooperation with United Kingdom in combating terrorism and extremism would also be high on the agenda of the prime minister. The prime minister is also scheduled to  address the British Parliament, apart from lunching with Queen Elizabeth II at the Buckingham Palace.

The prime minister will also address around 60,000 people at  the Wembley stadium in London. Prime Minister Modi will also interact with CEOs at a roundtable in London, and later visit Tata- owned Jaguar Land Rover factory at Solihull.

During his UK visit, Prime Minister Narendra Modi will also address the British Parliament, apart from having lunch with Queen Elizabeth II at the Buckingham Palace.

The longest-serving MP of Indian origin in UK, Keith Vas believes that India must get a place at UN Security Council.

Vaz, who has been Member of Parliament for Leicester East since the 1987, told the media that he would like to see the British government announce a reduction in visa fee for the Indian students so that number of students visiting the UK could increase.

In Turkey, Prime Minister will attend G20 Summit that will commence on 14 November.