President rues the state of Indian Parliament on I-Day eve

Addressing the nation on the eve of the 69th anniversary of India's independence, President Pranab Mukherjee today said the institution of democracy is under stress in the country as the Parliament has been converted into an arena of combat rather than debate. 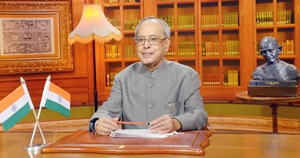 Reflecting popular sentiment over a wasted Monsoon session of Parliament, the President said "correctives must come from within".

Expressing concern over the apparent fractious politics, he said, "If the institutions of democracy are under pressure, it is time for serious thinking by people and their parties."

He said "the roots (of vibrant democracy) are deep but the leaves are beginning to wilt. It is time for renewal.

"If we do not act now, will our successors seven decades hence remember us with the respect and admiration we have for those who shaped the Indian dream in 1947? The answer may not be comfortable but the question has to be asked."

Asserting that the most precious gift of the Constitution is democracy, the President said, "Our institutions are the infrastructure of this idealism. The finest inheritance needs constant care for preservation.

"Our institutions of democracy are under stress. The Parliament has been converted into an arena of combat rather than debate."

Mukherjee said Indian democracy is "creative" because it is plural but diversity must be nourished with tolerance and patience.

"Vested interests chip away at social harmony, in an attempt to erode many centuries of secularism. In an age of instant communication through ever-improving technology, we must remain vigilant to ensure that the devious designs of a few never overcome the essential oneness of our people."

He said the rule of law is sacrosanct for both government and people but society is also protected by something greater than law - humanity.

He quoted Mahatma Gandhi "you must not lose faith in humanity. Humanity is an ocean; if a few drops of the ocean are dirty, the ocean does not become dirty".

The President said a great generation of supreme heroes faced formidable challenge when ideals and convictions that had held through the travails of an epic struggle against British rule were under strain.

"The sagacity and maturity of that generation saved our ideals from deviation or degeneration under the pressure of emotion, including rage," he said.

The country's rise will be measured by the strength of the values, the President said, adding that it will equally be determined by economic growth and equitable distribution of the nation's resources.

Mukherjee said it is most heartening that despite a dip in last one decade, the growth rate has been recovered to 7.3 per cent in 2014-15 but said the benefits of growth must reach the poorest of the poor much before they land in the bank accounts of the richest of the rich.

"We are an inclusive democracy, and an inclusive economy; there is place for everyone in the hierarchy of wealth. But the first call goes to those who suffer on the brink of deprivation. Our policies must be geared to meet the 'Zero Hunger' challenge in a foreseeable future," he said.

"Our economy promises much hope for the future. The new chapters of the 'India Story' are waiting to be written. 'Economic reforms' is a work-in-progress," the President said.

The President said a nation which forgets the idealism of its past loses something vital from its future. Our educational institutions multiply as the aspirations of generations continue to exceed supply.

"But what has happened to quality, from base to apex? We recall the guru-shishya parampara with legitimate pride; why then have we abandoned the care, devotion and commitment that is at the heart of this relationship? A guru much like the soft and skillful hands of a potter, moulds the destiny of shishya.

"The student with devotion and humility acknowledges the debt of the teacher. Society respects and recognises the merit and scholarship of the teacher. Is that happening in our education system today? Students, teachers and authorities must pause and introspect," he said.

Referring to concerns over environmental degradation, Mukherjee said the symbiotic relationship between man and nature has to be preserved.

"A generous nature when violated can turn into a destructive force leading to calamities resulting in huge loss of life and property.

"Even as I speak, large parts of the nation are barely recovering from floods. We need immediate relief for the afflicted as well as long-term solutions for the management of both, water deficiency and excess," he said.

(See: Full text of President Pranab Mukherjee's address to the nation on the eve of India's 69th Independence Day)