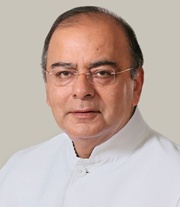 With several financial bills and ordinances stuck in Parliament, finance minister Arun Jaitley today appealed to the opposition not to play an "obstructionist" role as the country has a "historic opportunity" to grow, with GDP expected to go beyond 8 per cent next year, overtaking China.

Replying to a debate in the Lok Sabha, Jaitley glossed over the fact that his own BJP played obstructionist tactics at every turn of the road during the previous UPA regime.

Observers commented that Jaitley has the nerve of a thorough politician, if nothing else.

He rejected the charge that the government is pro-rich, saying it has ''proposed'' reduction of corporate tax from 30 per cent to 25 per cent. Again, he obfuscated over the fact that it was only a proposal and far from reality.

He sought to take the battle to the Congress camp, saying he had borrowed the idea from the Direct Taxes Code prepared by the UPA's finance minister P Chidambaram.

In a veiled message to the Reserve Bank of India, Jaitley also urged a reduction in interest rates, warning that growth will otherwise suffer.

He was replying to a debate in Lok Sabha on the appropriations bill, which was later passed by a voice vote, thus completing the first phase of the budgetary exercise in the lower house.

"This is a historic opportunity where India has real chance of growing. The world also sees India as a bright spot. We must use this opportunity," the finance minister said. "I appeal with folded hands ... let politics of obstructionism not go to next stage."

While talking about the "historic opportunity", he said the global economic situation suits India as Brazil faces a challenge, Europe has slowed down and China's 7 per cent growth is a new normal.
"IMF says India will overtake China," he added, quoting a statistic that most economist consider misleading because of dubious bases.

Jaitley also offered to find a solution to the opposition demand for changes in the land acquisition bill after the opposition parties led by Congress president Sonia Gandhi today held a march against the contentious Land Acquisition Bill.

Amendment to land bill is entirely in favor of rural India, it seeks to provide housing to poor, seeks to create infrastructure. There is no reason why any political party with any commitment to development must oppose this bill, Jaitley added.