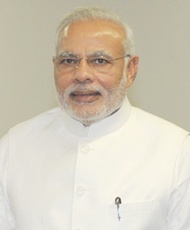 Prime Minister Narendra Modi on Friday sought experts' views on formulating an economic policy that is both 'saleable' and suitable for the country.

During his interaction with economists at NITI Aayog, the PM emphasised the need for cooperative federalism, which would herald healthy competition for development among states.

Modi, who interacted with a diverse group of experts at NITI (National Institution for Transforming India) Aayog, sought their views on establishing a dynamic institutional mechanism to take the country towards a higher and faster growth path.

Setting the tone for the interaction, the prime minister said that one of the objectives of NITI Aayog was to establish a dynamic institutional mechanism where eminent individuals outside the government system could contribute to policy making.

The prime minister said India must develop fast, taking advantage of the current global environment, to meet the aspirations of the people. He spoke of the government`s recent initiatives, including the Pradhan Mantri Jan Dhan Yojana, direct cash transfer of LPG subsidy, and Swachh Bharat.

The economists emphasised on the need for the government to work towards high growth, predictable tax regime, fiscal prudence and rapid infrastructure development. Several other suggestions were also made on various sectors of the economy.

Modi, however, wanted a convergence of views and wanted them to come up with ideas to speed up economic development so as to meet the rising aspirations of the people.

Sources said, Modi was well aware that not everyone was likeminded on such economic issues as GDP, interest rates and `Make in India.' Different people in the economic administration have different perceptions.

The RBI governor also doubted the efficacy of the 'Make in India' initiative, the way in which it was being implemented would only help to antagonise its trade partners who wanted to sell their goods in India.

Rajan also was emphatic when he said the economy won't grow if the BSE Sensex zooms. A lose money policy would drive up markets and help businesses improve margins, but will not help sustainable production and economic growth.

''Financial stability sometimes means regulators, including the central bank, have to go against popular sentiment. The role of regulators is not to boost the Sensex but to ensure that the underlying fundamentals of the economy and its financial system are sound enough for sustainable growth'' Rajan had said earlier

However, finance minister Arun Jaitley said, ''The cost of capital I think is one singular factor which has contributed to slowdown of manufacturing growth itself manufacturers find it difficult to afford costly capital''

The prime minister's intent was to sort out the difference of opinion among the key functionaries of the government.

Talking to reporters after the meeting, finance minister Jaitley said the meeting also discussed the state of economy and the steps needed to boost investment and growth as well as specific suggestions on the budget.

''The discussions were in relation to the financing of infrastructure, how to attract investment, how to boost domestic savings and the state of agricultural sector,'' the finance minister said.