Narendra Modi and his Bharatiya Janata Party made big gains in the just-concluded elections to the Jammu and Kashmir assembly although the party failed to make the grade for government formation while in Jharkhand the BJP coalition is all set to form government. 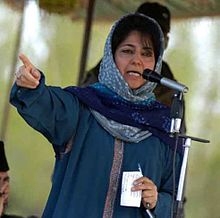 The People's Democratic Party (PDP) emerged the single-largest party but far short of a majority in Jammu and Kashmir while the BJP coalition is all set to form government in Jharkhand with All Jharkhand Students Union (AJSU) in tow.

In J&K, the PDP increased its tally from 21 to 28 seats in a house of 87 while the BJP saw its strength more than double from 11 to 25, but with all gains coming from the Hindu-majority Jammu region.

Obviously, Prime Minister Narendra Modi's extensive ''Mission 44+'' campaign failed to make any breakthrough in the Valley and Ladakh where it drew a blank in 50 seats and the 25 seats it won were from the Jammu region.

Chief minister and National Conference president Omar Abdullah lost from Sonawar seat but managed to cling on with a slender margin of 1,000 votes in the Beerwah constituency.

NC's coalition partner in the government, the Congress, slipped to the fourth position securing 12 seats against 17 it held.

With NC in a mess, the Congress has now volunteered to support the PDP. "We are always open. We have allied with PDP in the past," said Congress leader Ghulam Nabi Azad.

However, PDP leader Mehbooba Mufti said her party "is in no hurry" as it examines options for partners to form a lasting government.

Outgoing chief minister Omar Abdullah said the NC cannot be ignored in the current situation. ''The NC will be a serious player in whatever unveils in Jammu and Kashmir in the next few days,'' he said.

The BJP's success in Jharkhand is a follow-on of its victory in Maharashtra and Haryana in the recent assembly elections after its stupendous victory in Lok Sabha polls.