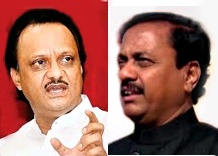 "I have been authorized by chief minister of Maharashtra to state that he has cleared open inquiries by the ACB against Ajit Pawar, Sunil Tatkare and Chhagan Bhujbal," Manohar informed the court in a PIL hearing.

The move comes as a a major setback to the Nationalist Congress Party, which had declared unconditional support to the BJP government, as the three belong to it.

Ajit Pawar was the deputy chief minister in The Congress-NCP coalition, then water resources minister Sunil Tatkare is now the state NCP chief, and senior leader Chhagan Bhujbal, who was minister of public works and special assistance department,.

The probe will ascertain the roles of  Ajit Pawar and Tatkare in the mega-irrigation scam during their tenures as irrigation ministers at various points in the past 15 years of the Congress-NCP rule.

Bhujbal would be probed for his role as the PWD minister in the alleged irregularities in the construction of the Maharashtra Sadan in New Delhi at  a cost of Rs150 crore without inviting open tenders, and two other government buildings in Mumbai.

"The ACB proposal had come to us and we have already approved it. Today (Friday) we have informed the court. There will be an impartial probe and the law will take its own course," Fadnavis told the media later.

The irrigation scam was exposed in 2012 when whistleblower Vijay Pandhare, the then chief engineer in the water resources department, detailed in letters to the then Maharashtra chief minister Prithiviraj Chavan and the governor pointing out the irregularities and cost variation in irrigation projects.

Pawar, as water resources minister between 1999 and 2009, is alleged to have approved 38 projects worth Rs20,000 crore in 2009 by bending rules and without clearance of governing council of Vidarbha Irrigation Development Corporation (VIDC). The expenditure did not add to the irrigated land in the state, as the percentage of irrigation potential rose by a mere 0.1 per cent despite an expenditure of Rs70,000 crores on such projects in the last 10 years.

The furore led to the resignation of Ajit Pawar.

Later in 2012, the then Maharashtra government had tabled a white paper on the issue in the Maharashtra Assembly, giving Pawar a clean chit , paving the way for his reinduction as the in deputy chief minister.