Union minister of finance and defence Arun Jaitley with assets totalling Rs114.03 crore remains the richest minister in the Narendra Modi-led National Democratic Alliance (NDA) government, but it is railway minister DV Sadananda Gowda who showed the greatest propensity to create wealth for himself with a Rs10.46 crore increase in assets over a five-month period in office. 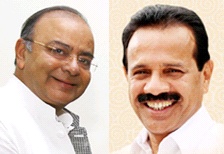 Gowda saw his assets worth Rs9.88 crore as declared during the Lok Sabha elections increase by Rs10.46 crore to reach Rs20.35 crore in the five months since he took over as minister in the Modi cabinet.

Jaitley's assets have shown an increase of only Rs1.01 crore with its value rising from Rs113.02 crore during the Lok Sabha polls to Rs114.03 crore in the 2014 disclosure to the PMO.

He is fond of luxury cars and has declared ownership of high-end cars like a Porsche worth Rs1.02 crore, and vehicles from Mercedes Benz and BMW among others.

In the declaration of assets and liabilities by the Union council of ministers to the PMO, the assets of at least two other ministers have increased after they took office five months ago.

Gowda is followed by minister of state (independent charge) for heavy industries and public enterprises Radhakrishnan P of the BJP who has shown an increase of Rs2.98 crore from the Rs4.09 crore he declared in the Lok Sabha polls.

However, 16 ministers have shown a decrease in their assets with external affairs minister Sushma Swaraj emerging as the top loser.

Of the 44 members in the Modi ministry, 41 or 91 per cent are crorepatis while the previous UPA government had 47 crorepati ministers, but in a larger team of 79 (or 60 per cent).

An analysis of the wealth of Modi's ministers, including Modi himself, by the Association for Democratic Reforms (ADR) and the National Election Watch (NEW) has found the average value of assets of the Council of Ministers (according to the declarations on the PMO website) to be around Rs14.32 crore.

Food processing minister Harsimrat Kaur Badal of the Shiromani Akali Dal with a wealth of Rs108.31 crore is the second richest in the Modi cabinet while minister of state (independent charge) for power, coal and new and renewable energy Piyush Goyal comes third with a wealth of Rs94.66 crore.

Declarations of 45 ministers, including Modi himself, have been analysed. Of the 45 ministers, 37 had contested the Lok Sabha elections in 2014 while eight are members of the Rajya Sabha.

According to the ADR, many union ministers, including Gowda, Dr Harsh Vardhan, Ananth Kumar, Jitendra Kumar, Manoj Sinha, and Santosh Kumar Gangwar, have not declared the value of their agricultural land in their declarations.

The actual value of the increase in the property of many ministers, including Radhakrishnan P, has been difficult to evaluate as some ministers have not declared the values of their assets in a comprehensive format, according to ADR.

There are 16 ministers whose wealth has shrunk since the general elections with external affairs minister Sushma Swaraj emerging as the biggest loser with her wealth falling Rs3.89 crore (from Rs17.55 crore to Rs13.65 crore), followed by minister of state (independent charge) for development of north-eastern region Gen (Retd) VK Singh of BJP who saw his declared assts decrease by Rs3.13 crore (from Rs4.11 crore during the 2014 Lok Sabha elections to Rs98.27 lakh declared in the disclosure to the PMO).

Gen Singh is followed by health and family welfare minister Dr Harsh Vardhan of BJP who has declared a decrease of Rs1.28 crore (from Rs2.82 crore declared in the 2014 Lok Sabha elections to Rs1.54 crore in the disclosure to the PMO).

The declarations were made as per the code of conduct issued by the ministry of home affairs, which makes it mandatory for all ministers to disclose details of their assets and liabilities.