Modi backs up `Make in India' with labour reforms

Prime Minister Narendra Modi on Thursday unveiled a string of labour reforms, including measures to end 'inspector raj', asserting that ease of doing business is "essential" to ensure 'Make-in-India' campaign is successful. 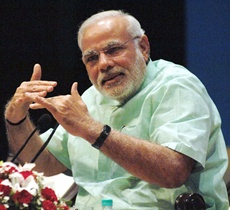 The reform measures announced by the prime minister are a combination of five main schemes, which include a dedicated `Shram Suvidha' portal, an all-new `random inspection scheme', universal account number for all employees, `Apprentice Protsahan Yojana' and a revamped `Rashtriya Swasthya Bima Yojana'.

Under the dedicated `Shram Suvidha Portal,' the government will allot labour identification number (LIN) to nearly 6 lakh units and these units will be allowed to file online compliance for 16 out of 44 labour laws.

The random inspection scheme will enable use of technology to eliminate human discretion in selection of units for inspection, while making uploading of inspection reports within 72 hours of inspection mandatory, the prime minister said.

A computerised list of inspections will be generated randomly on predetermined objective criteria and complaints-based inspection will also be determined centrally, based on data and evidence.

There will also be provision of an emergency list for inspection of serious cases.

"We have replaced 16 forms (which factory owners had to fill) with one form, which is available online. Now computer draw will decide which inspector (labour) will go for inspection to which factory and he will have to upload his report online in 72 hours.

"These facilities are what I call minimum government, maximum governance. I have been hearing about 'inspector raj' since childhood," Modi said while inaugurating the 'Pandit Deendayal Upadhyay Shramev Jayate Karyakram' organised by the labour ministry.

The universal account number will enable 41.7 million employees to have their provident fund account portable, hassle-free and universally accessible.

He said he is keen that the Rs27,000 crore lying unclaimed in PF accounts are given back to their claimants, arguing that if mobile subscribers get connectivity everywhere they go, why cannot migrating labour force continue to get PF benefits.

"I have to give back this money to the poor. This Rs27,000 crore belongs to the poor," he said even as he took a dig at this critics for questioning his vision.

Under the 'Apprentice Protsahan Yojana', manufacturing units and other establishments will be reimbursed 50 per cent of the stipend paid to apprentices during first two years of their training.

At present, there are 2.82 lakh apprentices undergoing training against 4.9 lakh seats.

An initiative to revamp the apprenticeship scheme has been undertaken and the particular scheme will support one lakh apprentices during the period up to March 2017.

The government also proposes to introduce a 'Smart Card' for workers in the unorganised sector seeded with details of two more social security schemes under a revamped Rashtriya Swasthya Bima Yojana.

Speaking on the occasion, labour minister Narendra Singh Tomar termed these initiatives as bold steps in achieving the prime minister's vision of 'minimum government and maximum governance', emphasising that all actions of the ministry are geared to bring about greater transparency and speed in the system.

Tomar said three bills had already been introduced in Parliament with the vision to harness India's demographic dividend, and facilitate ease of doing business in the country. ''It is envisaged that the Apprentice Act, upon implementation, will increase the number of apprentices to over 23 lakh,'' he said.

Modi also reached out to 4.2 lakh ITI students through SMS as he greeted the achievers with ITI degrees in various fields, hailing the undergraduate technical course.

Besides the ITI students, about 10 million EPFO subscribers also got SMSes regarding portability through UAN and about 6.50 lakh establishments and 1,800 inspectors got SMSes about Unified Labour Portal which, the government believes will make for a transparent and accountable Labour Inspection Scheme.

The Prime Minister said that this event is different from other launches as the message has reached to the stakeholders at the same time.

Stressing that the government functions on trust and not doubt, he said that this was the vision behind his government's decision allowing self certification of documents by enterprising youths, who had to run from pillar to post earlier to get their documents attested by officials.

"Those who ask what is Modi's vision won't be able to see this because the power of their spectacles has gone up just looking for a vision," he said.

Exhorting people to accord respect to labour and consider labourers as 'Shramyogi', he said that society can develop only if the dignity and honour of labour is restored in social life vis-a-vis other white collared jobs.

Modi made a strong pitch for understanding and appreciating labour issues through the perspective of the labourers, so that they could be resolved with compassion.