The Bharatiya Janata Party (BJP) expects to repeat its success at the Lok Sabha polls with high voter turnout in Maharashtra and Haryana working in its favour. Votes will be counted on Sunday. 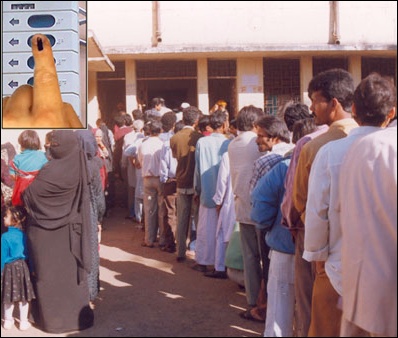 Haryana recorded its highest ever turnout at 73 per cent and Maharashtra its best in 15 years, according to the Election Commission.

Meanwhile, exit polls showed that BJP will be the biggest party in both Haryana and Maharashtra. So the first clear takeaway is that the BJP will form the government in both the states.

In Haryana, while the party may well be able to form the government on its own, in Maharashtra it may need a post-poll alliance.

BJP, which dumped allies in both states and has banked solely on what it calls the "Modi wave," will have to look for allies post-poll.

"Urging the people of Haryana and Maharashtra to go out and cast their votes. Youngsters must show the way and ensure record turnout," Prime Minister Modi tweeted this morning.

Modi campaigned extensively in the two states. He needs big wins in today's elections to raise his government's numbers in the Rajya Sabha to be able to push reforms through Parliament.

The BJP-led NDA is in a minority in the Rajya Sabha, whose composition is based on seats won in regional assemblies.

While all exit polls have clearly put the BJP way ahead of its rivals, News24-Today's Chanakya gives the party absolute majority in both Maharashtra and Haryana.

The Chanakya exit poll has better news for the BJP in Haryana, giving the party an outright majority in the state. This poll is a best-case scenario for the party, given that everyone else is predicting a much closer fight in the state.

Even ABP News-Nielsen puts BJP at pole position but also predicts a hung assembly in Maharashtra. The BJP may fall short of the half-way mark in the 288-member Maharashtra Assembly but still at touching distance of forming the government with 127 seats.

The Shiv Sena is also expected to do well and win 77 seats while Congress may get just 40 seats. Only 34 candidates of the NCP are likley to emerge the winner with MNS winning only 5 seats and others also getting 5.

News24-Today's Chanakya shows that the Congress's 10-year rule is coming to an end with the BJP securing absolute majority in the 90-member assembly by winning 52 seats. Om Prakash Chautala's Indian National Lok Dal may secure 23 seats while Congress will end third with only 10 seats. Others will get 5 seats.

India TV-C Voter exit poll also projects BJP as the dominant force in the state with 34-40 seats. INLD will come second at 25-31 seats, Congress 12-18, Haryana Janhit Congress and its allies 3-9 while others may bag 1-7 seats.

According to ABP News-Nielsen, the BJP may cross the half-way mark with 46 seats followed by INLD at 29, Congress 10, HJC+ 2 and others 3.