The Odisha government on Friday deployed rescue teams at vulnerable places and asked district authgorities to begin evacuations of people, as cyclonic storm 'Hudhud' less than 600km from the state's coast, is expected to hit landfall. 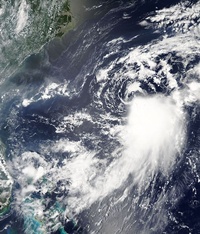 "At least 25 teams, 15 of NDRF and 10 ODRF, have been deployed at vulnerable areas keeping an eye on the cyclone and heavy rainfall," Special Relief Commissioner PK Mohapatra told reporters.

Tribal dominated district Malkangiri was this time in focus, Mohapatra said, adding the severe cyclonic storm was likely to pass over the district. This would create a lot of rain in the combined Koraput district comprising Koraput, Malkangiri and Rayagada.

Other likely districts expected to  be hit by the cyclone are Koraput, Malkangiri, Rayagada, Kandhamal, Kalahandi, Nayagarh, Gajapti and Ganjam.

According to Mohapatra all the districts have been provided with satellite phones for emergency and constant vigil was being maintained on the rivers like Bansadhara, Rusikulya and Nagabali as heavy rain is expected in southern districts.

"We have asked the collectors that no one should remain inside 'kutcha houses' in Malkangiri district. All the people living in 'kutcha' houses need to be evacuated to safe place," Mohapatra said, adding that this was being done keeping the state's commitment of "zero casualty" as target.

The SRC also asked the district authorities to start free kitchen where the government undertakes evacuation drive. The districts are also told to stock adequate quantity of dry food, he said.