The National Democratic Alliance government led by Narendra Modi has decided to prescribe performance targets and introduce a corporate style evaluation system for the various ministries based on the targets set by the cabinet secretariat. 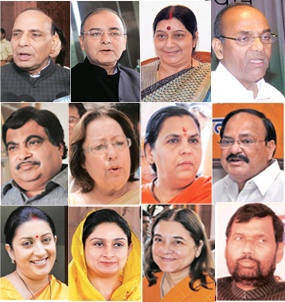 Prime Minister Narendra Modi, who held a marathon meeting with his council of ministers on Monday, is believed to have told them to work for efficient governance and time-bound implementation of the work undertaken by ensuring that the benefits reach the people.

During a three-hour meeting held at his residence, Modi talked about his ideas on how to boost the economy, attract greater investment and improve infrastructure.

In order to ensure the ministries stick to people-centric performance, the work of the various ministers will be rated in 'corporate style' evaluation on an annual basis – similar to a plan attempted but abandoned by the UPA-2 government.

Former prime minister Manmohan Singh had introduced a Results Framework Document (RFD) for all ministries in the UPA-2 but had to drop it in the face of stiff opposition by senior ministers.

The UPA-2 evaluated the ministers' performance only once and the exercise was junked after Gulam Nabi Azad and Ambika Soni protested over their getting poor rankings.

The highest bureaucratic office of the country would set performance targets for the ministries based on inputs received from respective departments. A Results-Framework Document (RFD) is a record of understanding between a minister representing the people's mandate, and the secretary of a department responsible for implementing that mandate, a senior government official said.

The document would include not only agreed objectives and projects but also success indicators and targets to measure progress in implementing the objectives. It would indicate at the end of a financial year department-wise outcomes of the objectives set and ranking of each ministry. Those who achieve 100 per cent would be ranked excellent and those achieving 60-per cent target would be rated as poor.

The prime minister is believed to have discussed matters centered on the 100-day agenda, which Modi had asked his ministerial colleagues to set, identifying priorities.

He is also understood to have sought suggestions from the ministers on various matters related to governance, sources said.

The appraisal system is based on the vision, mission and objectives of the various programmes of the ministries vis a vis the action taken and targets achieved.

Vision is the larger picture of what the minister wants the organisation to look like in future; the mission relates to the steps needed to be taken to achieve the vision over the long term and the objectives are the broad targets specified for the ministry in 12th Five Year Plan.