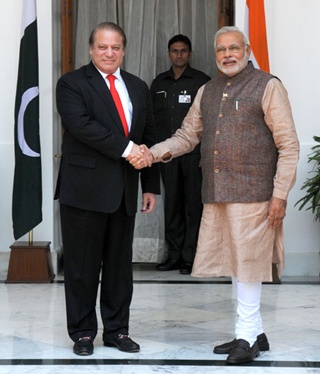 The key meeting was of course Modi's with Pakistan Prime Minister Nawaz Sharif, which was delayed by 20 minutes as the latter visited Jama Masjid and Red Fort. External affairs Minister Sushma Swaraj was also present at the meeting.

Sources say that in the meeting that lasted for 40 minutes, India conveyed its concerns on terrorism strongly to Pakistan. All issues of security figured in the talks, reports say. These included the attack on the consulate in Herat and that the Afghanistan president had indicated the involvement of the Pakistan based Lashkar-e-Taiba (LeT).

She added that India was looking to open up the Wagah-Attari border for full trade. "We want peaceful and friendly relations with Pakistan, but to proceed further, terror and violence should be brought under control," she said.

After the meeting, Sharif told reporters that for peace and security, it was necessary to bring about stability instead of exclusively focusing on insecurity.

''I urge that we should change from confrontation to cooperation and not engage in accusations and counter-accusations,'' he said.

He further said the foreign secretaries of the two countries would meet regularly. ''My government stands ready to discuss all issues between both countries,'' he said.

"I recalled to PM Modi my invitation to PM Vajpayee  we want to pick up the threads from the Lahore Declaration from where we left off.'' He said he had a warm and constructive meeting with PM Narendra Modi.