The Bombay Stock Exchange's Sensex surged over 400 points to its third successive record high on Tuesday as most exit polls projected a win for the Narendra Modi-led National Democratic Alliance in the general elections concluded on Monday; while the National Stock Exchange's Nifty jumped over 135 points and traded above the 7,150 level for the first time. 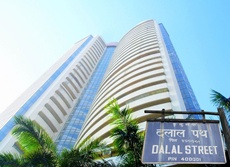 At the day's high, the Sensex was just three points away from hitting the psychological 24,000 mark. The 30-share index has gained over 1,600 points in the last three sessions.

The Bharatiya Janata Party-led NDA is projected to win between 249 and 340 seats, according to six exit polls. It needs 273 seats for a simple majority. The BJP's own tally could be over 210-220 seats apart from those won by NDA partners, the exit polls predicted.

According to an India TV-Cvoter survey, the NDA is poised to bag 289 seats in the Lok Sabha, of which the BJP is expected to win 250 seats on its own. The ruling Congress-led United Progressive Alliance was predicted to win just 107 seats in its worst performance ever, according to the poll.

The News 24 Chanakya exit poll predicted a clean sweep for the BJP with 291 seats, making it capable of forming a government on its own. With its partners, the BJP is predicted to bag 340 seats. The Congress is expected to be at an all-time low with only 57 seats, while the UPA as a whole is predicted to get to 70.

According to the ABP News-Nielsensurvey, the NDA will comfortably form government by crossing the 272 mark. It predicted the NDA would win 281 seats while the UPA is not likely to cross even 100. According to this survey, the BJP will gain hugely in Uttar Pradesh, Bihar and Maharashtra.

The Times Now-ORG exit poll did not give a clear majority to the NDA but predicted 148 seats for the UPA and 249 for the NDA. It projected a clean sweep for the BJP and its prime ministerial candidate Narendra Modi in the north, with the party predicted to win 52 seats in Uttar Pradesh and six seats in Delhi.

The CNN-IBN-CSDS-Lokniti survey projected the NDA would bag about 276 seats while the UPA would not cross the three-figure mark. It projected strong showings by the BJP in Uttar Pradesh, with 45 to 53 seats, and in Maharashtra, where the BJPShiv Sena alliance looked set to bag 33 to 37 seats.

Of course, exit polls - or a survey of voters as they come out of polling booths to find out how they voted - have proved unreliable in the past – most notably in 2004, when they all predicted another term of NDA rule, only to be confounded by a UPA win leading to the first Manmohan Singh government.

This time, however, while they may prove wrong in terms of detailed numbers, the overall BJP wave seems too strong to be reversed.