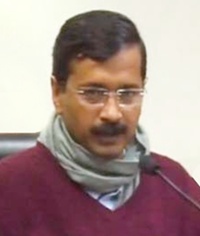 Kejriwal has been dragging his feet over the matter and has even defended Bharti against the accusations of an Ugandan woman, who accused Bharti of assaulting her in a midnight raid in south Delhi.

She said they were attacked on Wednesday night by Indians, who were led by Somnath Bharti. She added, they were harassed and hit with sticks by the mob of AAp volunteers led by Bhrti and told them to leave the country or else they would be killed one by one.

The Delhi Police, which had earlier filed an FIR against ''unknown people'', might need to book Bharti in the case as he had been named by the Ugandan woman in her statement before the magistrate.

The law minister along with his supporters stand accused of illegally detaining Ugandan women and forcing them to undergo medical tests.

But more embarrassment for the Delhi CM was to come after Bharti said, he would spit on the faces of BJP leader Arun Jaitley and senior lawyer Harish Salve for being critical of him.

Kejriwal's meeting with the Jung comes a day after various women rights activists and Delhi Commission for Women sought action against Bharti for allegedly taking law into his hands.

The AAP government had come under attack from political parties, media and women activists who said the chief minister who had staged a two-day dharna in the name of women's safety was following "double standards" when it came to the law minister.

With the minister emerging as source of major embarrassment, Bharti has been advised by AAP to be "careful and humble" while making public statements.

Several party leaders are said to be upset with Bharti who had earlier stoked controversies when he sought a meeting of Delhi judges and was involved in talking to a witness he was cross examining as a lawyer.

Though Bharti has refused to make any comments on the demands for his removal the  party and his colleagues have defended him, saying any citizen, more so a minister, had the right to ask police to act on any illegal activity.