The Congress party looked set for a 1-4 drubbing in assembly polls to five states after counting of votes were completed in four states except Mizoram, where the Congress is the only national party with a foothold. 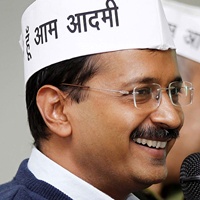 In three of the four states where election results have been announced, the opposition Bhartiya Janata Party has emerged a clear winner, but in Delhi, the Aam Aadmi Party spoiled its chances of getting a majority.

AAP leader Arvind Kejriwal also emerged the giant-killer with the shock defeat of three-time chief minister, Sheila Dikshit, against whom he won the New Delhi assembly constituency by a big margin.

The stunning debut of the AAP in Delhi, which won 28 seats out of the total 70 seats, has also opened a new front for both the BJP and the Congress in future elections with the AAP vowing to go national very soon.

The BJP swept back to power in Rajasthan and Madhya Pradesh while holding on to power in Chhattisgarh and emerging as the single largest party in Delhi.

In Rajasthan, former chief minister Vasundhara Raje spearheaded a saffron resurgence, winning 162 seats, its highest ever tally, in the 200-member assembly, leaving Congress with only 21 and ousting it from power.

Shivraj Singh Chauhan of the BJP overcame anti-incumbency factor and rode back to power on the back of his popularity and people friendly policies of his government.

In Chhattisgarh, chief minister Raman Singh managed to retain the state for BJP in a neck-and-neck fight with the Congress. The BJP won 49 seats, with the Congress winning 39 and other 2 in the 90-member assembly.

The BJP had won 50 seats last time and Congress 38.

In Mizoram, however, the Congress was leading in four seats while the Mizo National Front was ahead in one assembly constituency in early trends available today.

The BJP won a clear majority in three out of the four states where results of the assembly elections were released while the Aam Aadmi Party prised open a space in national politics with winning 28 of the 70 assembly seats in the national capital.

Out of the total 70 seats, the BJP has won 31 seats, the AAP 28 seats and the Congress just 8 seats while the SAD, BSP and an independent won one seat each.

Congress president Sonia Gandhi and vice president Rahul Gandhi tried to put up brave face, saying, ''These results call for deep introspection. We will take necessary steps to correct our mistakes and our way of functioning.''

Sonia Gandhi also said her party will take a decision on choosing the prime ministerial candidate for 2014.

Party vice president Rahul Gandhi said the Congress party has the capability to stand up to the expectations of the country. The party would move to a system to give serious space to the common man, he added.