The Comptroller & Auditor General of India, increasingly hawk-eyed to spot irregularities, has blasted the Gujarat government of Chief Minister Narendra Modi for causing a loss to the state exchequer to the tune of Rs17,000 crore. 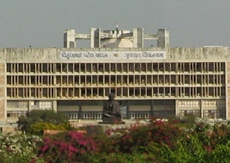 In its report for the fiscal year ended 31 March, tabled in the Gujarat Legislative Assembly today, the CAG said corruption and irregularities have caused huge losses to the state.

The financial watchdog blasted the Narendra Modi government for not being able to stop these irregularities.

The CAG report says that several corporate giants have got undue benefits from the state government. For instance in the power sector, while non-adherence to the terms of the Power Purchase Agreement by Gujarat Urja Vikas Nigam Ltd led to short recovery of penalty of Rs160.26 crore. Undue benefits were also given to Adani Power Ltd, it said.

Reliance Industries Ltd got a benefit of Rs52.27 crore through deviation from "the agreed terms of recovery of transportation charges for transportation of gas from the specified entry point of the company's pipeline network''.

The CAG further observed that "Larsen &Tubro was allotted government land for the manufacture of supercritical steam generators and a forging shop for nuclear power equipment. The price of the land was fixed at DLVC instead of SLVC rates. This resulted in forgoing of revenue of Rs128.71 crore".

Similarly the "delay in regularisation of encroached government land coupled with levy of ad hoc penalty at lesser rates in the case of Essar Steel Company Ltd. resulted in short recovery of Rs238.50 crore".

Highlighting lack of prudent fiscal management, the CAG criticised the Gujarat government for raising excess market borrowings over what was required for financing its deficit.

"However an increase of 41 per cent of net borrowing in 2011-12 over previous year for financing the deficit would lead to increased interest burden for incoming years.''

The CAG however also noted that a "redeeming feature of the fiscal deficit is that the government is primarily borrowing to finance its capital expenditure. During 2011-12, the revenue deficit of Rs5,076 crore of 2010 turned into revenue surplus of Rs3215 crore. This lowered the fiscal deficit in 2011-12 despite an increase in capital expenditure."

The CAG, also said that the state government had in its budget allocations earmarked more funds for various departments and projects, which, however, it could not spend due to several reasons.