The double bomb blast in Hyderabad on Thursday led to an uproar in Parliament and disrupted proceedings in what is just the second day of the Budget session. 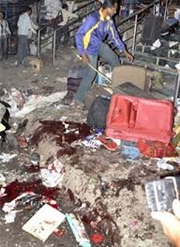 Both the Rajya Sabha and the Lok Sabha were adjourned till noon over what the opposition called lapses in handling the nation's security.

The vocal barrage resumed immediately after resumption, when leader of the opposition Sushma Swaraj of the Bharatiya Janata Party flayed the government for what she called an intelligence failure.

"The nation needs to be united; the political parties need to get united. The moment that happens, we will be capable in fighting terror," Swaraj said.

Home Minister Sushil Kumar Shinde is expected to make a statement later in the day on the in the Dilshukh Nagar area of Andhra Pradesh's capital on Thursday evening that left 15 people dead and 118 injured.