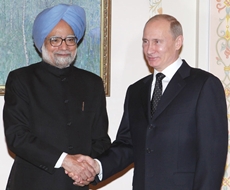 The meeting was slightly delayed and the venue was shifted from Hyderabad House due to the virulent protests at India Gate against the gang-rape of a young woman on a Delhi bus.

Before the meeting, the two leaders greeted each other in the inner yard of the prime minister's residence and posed for a brief photo session.

Putin and Singh are to be joined later by delegations of both nations. The discussions are expected to focus on economic ties, energy and multi-billion dollar defence deals. The parties will also focus on topical international problems.

Ahead of the meeting, Syed Akbaruddin, spokesperson of the ministry of external affairs tweeted that eight agreements are to be inked. Putin arrived early today for a one-day visit.

The negotiations will focus on the construction of the Kudankulam nuclear power plant (KNPP), India's participation in Russia's Sakhalin-I project, oil and gas projects in far-east Russia, as well as the production of an export variant of Russian plane-maker Sukhoi's T-50 stealth fighter, which India plans to begin from 2020, RIA Novosti said.