The government today agreed to a vote in Parliament on the issue of foreign direct investment in retail trade after a UPA meeting helped confirm support of allies, including reluctant Dravida Munnetra Kazhagam (DMK). 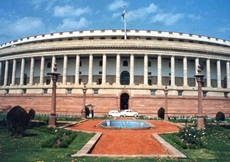 And, with opposition Bhartiya Janata Party (BJP) and the Left adamant on a discussion and vote on the issue under Rule 184 in the Lok Sabha and Rule 167 in the Rajya Sabha, parliamentary affairs minister Kamal Nath will meet BJP's Arun Jaitley tomorrow to discuss the modalities of a discussion.

The government, which had so far been against a vote on its decision to allow 51 per cent foreign direct investment in multi-brand retail trade in the country, today agreed to it after a meeting with allies.

Kamalnath said the allies have agreed to leave a decision on the rule for debate in the matter to the Lok Sabha speaker.

The BJP-led opposition has been pressing for a discussion under Rule 184 in the Lok Sabha and Rule 167 in the Rajya Sabha, which entail voting at the end of the debate.

"The UPA is fully united. The allies want the speaker to decide. I will consult the speaker," Kamal Nath said.

With DMK firmly behind it, the UPA looked fully geared to a debate in the Lok Sabha and the Rajya Sabha. But, the Congress seems less assured on a vote on the issue as it may still get defeated.

However, Prime Minister Manmohan Singh said, "We are confident of numbers."

While Mamata Banerjee-led Trinamool Congress had opposed the BJP and the Left at the all-part meet yesterday, the party cannot be depended as it is against foreign entry in retail trade in the country.