Youth brigade to the fore in major ministerial reshuffle

Prime Minister Manmohan Singh has clearly sought to give his government a more youthful face, besides rewarding loyalty to the party, in the biggest single ministry reshuffle since the United Progressive Alliance government came for its second innings, widely known as UPA-II. 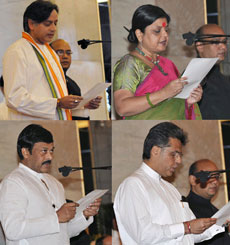 As many as 17 new ministers were inducted, seven of them with cabinet rank and others with independent charge. Many of the new faces are seen as close to Congress general secretary Rahul Gandhi, reflecting his increasing role in party affairs. The portfolios of five old hands were switched around in an effort to rationalise and streamline the government's functioning – there were some ministers like Veerappa Moily and Kapil Sibal with more than one portfolio; this is no longer the case.

"It is a combination of youth, experience and relevance to the portfolios that have been entrusted to the ministers," Singh told reporters soon after the new ministers were sworn in by President Pranab Mukherjee at a brief ceremony at Rashtrapati Bhawan on Sunday.

"The road ahead is full of challenges. But this is a team which I hope will be able to meet those challenges," the Prime Minister added.

He said this would probably be the last reshuffle of the council of ministers before the 2014 general elections, which would be held as scheduled.

Asked about the ministers who were dropped from the cabinet - former external affairs minister S K Krishna probably being the most prominent among them, along with information and broadcasting minister Ambika Soni -  Singh said that their services were required to strengthen the Congress party.