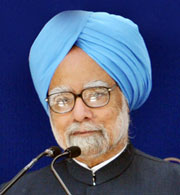 Prime Minister Manmohan Singh today defended his government's big bang reforms, saying that these reforms are already overdue and that without these the Indian economy could slow to 5 per cent growth in the immediate future. The reforms that aim to bring in foreign investment could also prevent a credit rating downgrade, he said.

He also defended the diesel price hike saying since energy is a difficult area and the country is energy deficient and import dependent, rational energy pricing is critical (Diesel to cost Rs5 more; LPG restricted to 6 cylinders a year).

''Our energy prices are out of line with world prices. The recent increase in diesel prices is an important step in the right direction,'' he said.

Addressing a Planning Commission meeting to finalise investment targets for the 12th five-year plan (April 2012- March 2017), he said the government would peg annual rate of growth during the 12th Plan period at 8.2 per cent, against 9 per cent projected earlier.

While the country may or may not achieve the expected growth rate, the Prime Minister said it is also necessary that the conditions necessary to achieve the desired growth are fulfilled.

He outlined a potential scenario that could bring down the projected growth rate to 5 per cent in the absence of policy support necessary to achieve higher growth.

The most important area for immediate action is to speed up the pace of implementation of infrastructure projects. This is crucial for removing supply bottlenecks which constrain growth in other sectors. It will also boost investor sentiment to raise the overall rate of investment, he said.

But to achieve high growth in the infrastructure sector, he said India would require close to a trillion dollars of investment and we have to work hard to achieve this.

The immediate priority must be to orchestrate a rebound in the second half of the current year. "We should then try to accelerate growth to reach around 9 per cent by the end of the Plan period," he emphasised.

This will yield a target growth rate of around 8.2 per cent over the Plan period. This is lower than the 9 per cent originally projected, but some downward revision is realistic given the state of the world economy, he said.

Speaking of his government's achievements, he said the Indian economy grew at an average annual rate of 7.9 per cent in the 11th Plan period. This is commendable for a period which saw two global crises – one in 2008 and another in 2011, he added.

Agriculture grew at 3.3 per cent per annum in the Eleventh Plan, much faster than the 2.4 per cent observed in the Tenth Plan.

Also, he said the 12th Plan is starting in a year when the world economy is experiencing difficulties and our economy has also slowed down.

These short term problems present a challenge, but they should not lead us to undue pessimism about our medium term proposals, he added.

The 12th Plan contains ambitious programmes in health, education, water resource management, infrastructure development and a number of programmes aimed at strengthening the processes of inclusiveness, most notably the Mahatma Gandhi National Rural Employment Guarantee Programme, the PMGSY, the IWDP and the National Rural Livelihoods Mission, he said.

"Considerable resources are being allocated for these programmes. We need to pay much greater attention to making sure that these programmes are also delivering results on the ground," he pointed out.

Up to 74 per cent foreign investment permitted in broadcasting services

Government lines up 4 PSUs for divestment