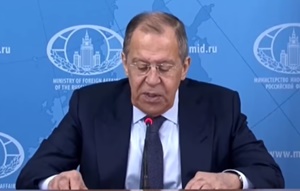 The two countries also decided to pursue bilateral cooperation despite dissuations caused by regional and global developments. Moscow and New Delhi also reassured themselves that neither threats of sanctions from the United States nor military threat posed by China will stand in the way of bilateral trade and defence ties.
Lavrov said talks touched on manufacturing of state-of-the-art weapon systems, even as he noted that Russia is the only partner that transfers cutting-edge military technology to India.
“In this strategically important area, Russia is a major foreign contractor for New Delhi. I am sure deepening of Russian Indian military cooperation serves the national interest of both countries,” said Lavrov.
Lavrov said military ties with India were deepening while ruling out any military alliance with China. The statement is significant considering the India-China military standoff for nearly a year in East Ladakh.
Speaking alongside Indian external affairs minister S Jaishankar, Lavrov also spoke of Russia manufacturing 750 million doses of the Sputnik-V vaccine in India. Discussions about the manufacture of the Bharat Biotech in Russia are on, he said .
The two foreign ministers also discussed the Afghanistan situation and agreed on the involvement of the Taliban and other regional powers, without which any solution would be "unsustainable."
Lavrov also said that Moscow respected India's decision to diversify the purchase of military weapons from other countries, a reference to the United States and France, adding that Russia has assurances that there was no plan for an Asian NATO.
Denying that he had said US exercises pressure on India, Lavrov said there were no discussions on statements from the US against arms trade with Russia.
Both sides also touched on cooperation in energy, including nuclear, peaceful exploration of space and manned programs, rocket engine building, satellite navigation, the Russian Far East and the Arctic.
Fresh from a meeting with Chinese Foreign Minister Wang Yi last month, Lavrov said though Russia-China relations at the summit-level are at their highest levels in history; there are no discussions on a military alliance. Whether it was a Russia-China military alliance or talks of a Middle East NATO or an Asian NATO, “we believe it is counterproductive. Our Indian friends have the same position,” he observed.
MORE REPORTS