Pakistani terror group Jaish-e-Mohammad (JeM) is planning major strikes in India and have targeted Prime Minister Narendra Modi and other top brass of the country as well as defence and paramilitary establishments, according to intelligence inputs. 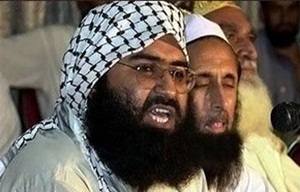 Fresh inputs received by intelligence agencies in India suggest that as many as 45 militants are likely to have crossed over into Jammu and Kashmir over the last fortnight and may now target the Prime Minister as well as defence establishments under the Northern Command.
The Indian Air Force (IAF) bases in Jammu and Kashmir, Punjab, and Uttar Pradesh have been put on high alert after intelligence agencies issued a warning against a suicide attack by Jaish-e-Mohammad (JeM) terrorists in those IAF bases.
Reports citing top government sources said, a module consisting 8-10 JeM terrorists will attempt to carry out the attack in Srinagar, Awantipora, Jammu, Pathankot, and Hindon air bases.
Following intelligence inputs, IAF bases have been put on high alert and senior officers are reviewing the security arrangements round the clock to tackle the threat.
The JeM threat assumes significance in the backdrop of reports that Pakistan is dropping weapons in Punjab, possibly to armbterrorists who have infiltrated into Jammu and Kashmir.
The arms were delivered to the Taran Taran district of Punjab by the Khalistani group, Khalistan Zindabad Force (KZF), with the help of Inter-Services Intelligence (ISI). These weapons were to be used in Kashmir.
Indian Army Chief General Bipin Rawat had earlier warned that the JeM camp in Pakistan’s Balakot that has been destroyed in an attack by IAF in February following terror attack on CRPF personnel in Pulwama in Jammu and Kashmir, has now been reactivated. General Rawat had further said that as many as 500 terrorists were waiting across the border to infiltrate into the Indian territory. He had said that the terrorists are waiting for the temperatures to fall to push into Indian territory.
In fact, security forces on 23 September averted a possible terror attack in Jammu and Kashmir, when they recovered at least 40 kg of explosives along with other items from the Kathua region. The seizure was made during a search operation in Dewal village of Dilawal area of Kathua.
The inputs come at a time when the Indian Army has stepped up vigil along the Line of Control in Jammu and Kashmir in the wake of heightened ceasefire violations by Pakistan which is giving cover fire to infiltrators in this sector.
The inputs also suggested that the groups adopted an alternate route to skirt the presence of armed forces, through Narapatra to Kala Pahar to Lachhipura in Baramulla along the Line of Control to set up camps in north Kashmir.
Meanwhile, with the communication blockade in Kashmir has impeded the  task of gathering intelligence even as terrorist movements from across the Line of Control has risen.
MORE REPORTS