Security has been tightened in southern states of India even as the Sri Lankan government banned wearing of the burkha ot the veil in public places amidst warnings of a fresh wave of attacks on the island state by Islamic terrorists. 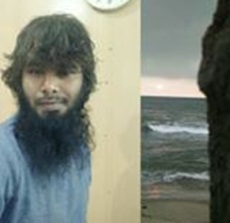 In India, the National Investigation Agency (NIA) on Monday arrested an Islamic State sympathiser and a close follower of Zahran Hashim who was the mastermind of the Easter Sunday suicide attacks in Sri Lanka.
Riyas Aboobacker was arrested from Kerala after he disclosed to NIA investigators that he has been following speeches and videos of Hashim, a radical Tamil-speaking cleric who was behind the Easter Sunday bombings in Sri Lanka that left 253 people dead and over 500 others injured.
The 29-year-old informed the NIA officials that he has been following Hashim for more than a year and has also followed the speeches of Zakir Naik, an absconding Indian Islamic preacher and founder of the now-banned Islamic Research Foundation.
Aboobacker admitted that he wanted to carry out a suicide attack in Kerala. He was being questioned by the NIA since Sunday when the agency unearthed the Kasaragod module of the terrorist outfit in Kerala during multiple raids at the house of three suspects.
Aboobacker alias Abu Dujana, a resident of Palakkad in Kerala, has been arrested on charges of conspiring to commit a terrorist act, an NIA statement said.
The suspect, NIA said, revealed during his interrogation that he had been in online contact with an absconding suspect Abdul Rashid Abdulla for a long time and has been following his audio clips, including the clip which he had circulated in the social media instigating others to carry out terror attacks in India.
Aboobacker revealed that he was also having online chat with Abdul Khayoom, a suspect in Valapattanam Islamic State case, who was believed to be in Syria, said the anti-terror agency.
The NIA had earlier received inputs that a group of four persons was in contact with some accused identified as Abdul Rashid, Ashfaq Majeed and Abdul Khayoom who had already migrated to Afghanistan and Syria.
After verification, NIA carried out searches at three places (two in Kasaragod and one in Palakkad district) on Sunday.
The agency said three group members have been interrogated for their Islamic State links and their plans and that this case was registered in July 2016 following the disappearance of 15 youths from Kasaragod and their subsequent migration to the Islamic State (14 persons went to Afghanistan and one person to Syria).
Aboobacker will be produced before a special NIA court in Kochi today, the agency said.
Meanwhile the Islamic State of Iraq and Syria (ISIS) has released a video showing its leader Abu Bakr al Baghdadi making his first appearance since July 2014. The terror outfit has claimed that Baghdadi is alive.
Screen grab showing the ISIS leader Abu Bakr al Baghdadi making his first appearance since July 2014. The terror outfit has claimed that Baghdadi is alive. In the video, Baghadadi is seen sitting and talking to three individuals, whose faces have been blurred to deliberately conceal their identity. The video comes just days after the terror outfit claimed responsibility for one of the deadliest attacks in the history of Sri Lanka on Easter Sunday.
ISIL's Al Furqan network published the video on Monday in which it said that revenge would be sought for the death of its fighters. While the time of shooting the video is unclear, Baghdadi is seen referring to the end of the outfit's fight in Baghouz in Syria in the past tense, which indicates that the video may have been shot recently. "The battle for Baghouz is over," Al Jazeera translated him as saying.
Al Jazeera also reported that Baghdadi referred to Sri Lanka attacks as a 'revenge' and said that 'there will be more to come after this battle' in what is believed to be in reference to the final fight at Baghouz.
MORE REPORTS