The toll in Sunday’s serial blasts in Sri Lanka rose to 290 and the number of wounded admitted to hospitals rose to over 500 even as government forensic analyst said the eight serial blasts in churches and hotels were carried out by seven suicide bombers. 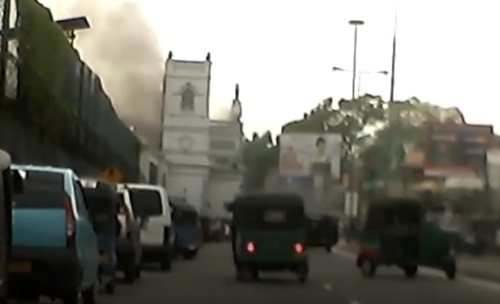 While the terrorists are yet to be identified and an official explanation of the terror attack may take some time, the attack had all the trappings of the 2008 Mumbai terror strike.
Sri Lankan police today said the van which had carried explosives to carry out bomb attacks at the three hotels had been held and the driver arrested. A safe house where the bombers had lived for nearly three months plotting the attacks was also located in the south of Colombo suburb of Panadura.
It is clear from the pattern of the attack that it is the same Mumbai blast ideologues that are behind the Sri Lankan attack. The terrorists seem to have decided to give India a miss this time round as the situation was not suitable for a perfect strike.
At least six Indians have been killed in the serial blasts, including suicide attacks, which struck three churches and luxury hotels frequented by foreigners in Sri Lanka on Easter Sunday, PTI quoted officials as saying.
The police said at least six Indian nationals have been reported among the foreigners who died in the blasts. External affairs minister Sushma Swaraj identified two more individuals killed in the blasts. "We sadly confirm the deaths of the following two individuals in the blasts yesterday, KG Hanumantharayappa and M Rangappa," Swaraj retweeted the Indian High Commission in Colombo's tweet.
On Sunday, Swaraj, in a series of tweets, identified the four Indians as Lakshmi, Narayan Chandrashekhar, Ramesh and PS Raseena.
Hours after the attack, Sri Lankan Prime Minister Ranil Wickremesinghe admitted that the government had some "prior information of the attack" but there was no 'adequate response' from their side.
The deadly attacks forced the Sri Lankan government to declare a curfew in Colombo and block access to social media and messaging sites. Sri Lankan Airlines has issued notice for passengers travelling during curfew, which ended at 6 am today.
Seven people have been arrested so far in connection with the blasts probe.
Indian intelligence sources see some similar patterns in the November 2008 Mumbai attack and Sunday’s attack i Sri Lanka in terms of targets, lethality and purpose of attack. The Mumbai attacks were designed not only to cause the maximum possible damage in terms of human casualties but also to target groups such as Western tourists.
In six near simultaneous attacks, the terrorists targeted three churches and three luxury hotels, Sri Lankan government forensic analyst an Ariyananda Welianga said, adding that during the November 2008 attacks in Mumbai also the attackers simultaneously targeted two luxury hotels, a busy railway terminal, and a Jewish outreach center.
Welianga says two people were involved in the attack at the Shangri-La hotel. One bomber each attacked the Cinnamon Grand and Kingsbury hotels and St Anthony’s Shrine in Colombo, St Sebastian’s church in the city of Negombo and Zion Church in the city of Batticaloa.
Two suicide bombers attacked Shangri La, one each targeted Cinnamon Grand, Kingsbury hotels
Indian Prime Minister Narendra Modi held telephonic conversation with Sri Lankan President Maithripala Sirisena and Prime Minister Ranil Wickremesinghe after the serial blasts hit the island nation.
Modi condemned the Sri Lanka blasts and reiterated 'national security' as poll plank in rally on Sunday
US state department issues travel advisory, says 'terrorist groups' may continue to plot attacks
The US state department said in a revised travel advisory ‘terrorist groups’ were continuing to plot possible attacks in Sri Lanka, Reuters reported, after serial blasts killed  over 290 people and wounded about 500 in churches and luxury hotels on Sunday.
Sri Lankan authorities blocked most social media after Easter Sunday attacks killed more than 200 people, with officials saying the temporary move was meant to curtail the spread of false information and ease tensions.
Police have so far arrested 24 people from the minority Muslim community in connection with the multiple blasts that rocked the island nation on Sunday.
Sri Lanka, an island nation of some 23 million people, was dominated for decades by the sharp divide between the majority Sinhalese, who are overwhelmingly Buddhist, and the minority Tamil, who are Hindu, Muslim and Christian.
The mistreatment of Tamils helped nurture the growth of armed separatists and led to nearly 30 years of civil war, with Tamil Tiger fighters eventually creating a de facto independent homeland in the country’s north.
Sri Lankans line up to donate blood for those injured in blasts. Several Sri Lankans took to social media to ask for blood donors soon after the attacks took place on Easter Sunday morning. The series of eight explosions have left at least 290 dead and hundreds injured.
The defense ministry said the shutdown would extend until the government concludes its investigation into the bomb blasts that rocked churches, luxury hotels and other sites.
There was still no claim of responsibility for the series of bomb blasts on churches and five-star hotels across Sri Lanka. There were fears the attacks could spark a renewal of communal violence, with police reporting late on Sunday there had been a petrol bomb attack on a mosque in the northwest and arson attacks on two shops owned by Muslims in the west.
Sri Lanka prime minister Ranil Wickremesinghe urged people to be united and coordinate with the security forces in their investigation into the Easter Sunday attacks that killed 290 people and injured hundreds more.
He also asked people to refrain from spreading fake news and misinformation as that would "divert" the time and efforts of the security forces "from bringing the perpetrators of the crime to justice".
MORE REPORTS