Yemeni rebels on Monday killed their one-time ally Ali Abdullah Saleh, the country's former president, after he switched sides in Yeman's ongoing civil war and abandoned his Iran-backed Houthi allies in favour of the Saudi-led coalition. 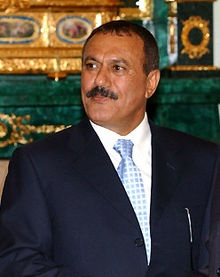 The former president was killed in a roadside attack on Monday, in signs that the Houthi's are gaining the upper hand in days of fighting with his forces for control of the capital, Sanaa.

Houthi and Saleh-loyalist forces have been fighting in Sanaa since late last week. The Saudi-led coalition had thrown its backing behind Saleh, hitting Houthi positions with airstrikes.

Salehi's death is seen as a setback to the Saudi-led coalition that intervened in the conflict in support of the internationally recognised government of President Abd-Rabbu Mansour Hadi, and a huge morale boost to rebel Hauthis.

The Houthis announced the death of Saleh and two of his associates and a Yemeni government official confirmed the news.

A militias' video also showed Saleh, dressed in a dark suit lying, motionless, and being carried in a blanket.

Saleh's death also ended all hopes of the Saudi-led coalition that the former president could have been used to turn the tables against the Houthis.

The Saudi-led blockade and internal fighting have so far only exposed millions to hunger and an epidemic, and did nothing to restore normalcy in the country.

The development has thrown the country's three-year civil war into an unpredictable new chapter just as Yemen's Saudi-backed government had hoped the Shiite rebels would be decisively weakened.

With Saleh's forces seemingly in disarray, it was not immediately clear if the Saudi-led coalition fighting the rebels will be able to turn the split to its advantage in the war.

Saleh, who ruled Yemen for more than three decades until an Arab Spring uprising forced him to step down in 2012, later allied with the Houthi rebels hoping to exploit their strength to return to power.

But that only helped propel Yemen into the ruinous civil war that has spread hunger and disease among its 28 million people.

Houthi officials said their fighters killed Saleh as he tried to flee the capital for his nearby hometown, Sanhan, but the exact circumstances were unclear.

Saleh paid the price for his ''treason,'' said the Houth's top leader, Abdul-Malek al-Houthi, who accused him of betraying their alliance to side with the Saudi-backed coalition.