The Supreme Court today ordered an investigation by the Central Bureau of Investigation (CBI) into the alleged extra-judicial killings by the Army, Assam Rifles and the state police in Manipur. 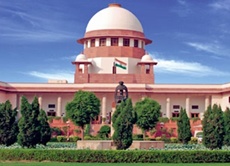 The apex court has directed the central investigation agency to set up a special investigation team (SIT) to probe the 98 fake encounter killings in Manipur in the last decade.

A bench of justices Madan B Lokur and Uday Lalit passed the order on a writ petition filed by the Extra Judicial Execution Victim Families Association (EEVFAM), a group representing the victims' kin.

The petition has demanded a probe by a special investigation team into the alleged fake encounters that resulted in 1,528 deaths in Manipur in the last decade.

The bench asked the CBI director to nominate a group of five officers within two weeks to probe the deaths. The team will go through the records of the cases, lodge necessary FIRs and complete the investigations by 31 December 2017, and prepare charge sheets wherever necessary.

''Under these circumstances, it would be inappropriate for us to depend upon the Manipur police to carry out an impartial investigation more particularly when some of its own personnel are said to be involved in the fake encounters.''

The bench quoted a Constitution bench ruling which held that an allegation of use of excessive force or retaliatory force by uniformed personnel resulting in the death of any person necessitates a thorough inquiry. ''We were of the opinion that even the 'Dos and Don'ts' and the 'Ten Commandments' of the Chief of Army Staff believe in this ethos and accept this principle,'' the bench noted.

The CBI has been asked to submit a report in the first week of January 2018.

''If members of our armed forces are deployed and employed to kill citizens of our country on the mere allegation or suspicion that they are the 'enemy', not only the rule of law but our democracy would be in grave danger,'' the apex court had observed in its 8 July 2016 ruling.

Justice Lokur rejected submissions of former attorney general Mukul Rohatgi, including that court should not order a probe when the families of the deceased had not complained. ''Access to justice is certainly a human right and it has been given a special place in our constitutional scheme where free legal aid and advice is provided to a large number of people in the country,'' the court said

''The primary reason is that for many of the deprived sections of society, access to justice is only a dream. To provide access to justice to every citizen and to make it meaningful, this court has evolved its public interest jurisprudence where even letter-petitions are entertained in appropriate cases. The history of public interest litigation over the years has settled that the deprived sections of society and the downtrodden such as bonded labourers, trafficked women, homeless persons, victims of natural disasters and others can knock on the doors of our constitutional courts and pray for justice.

''This is precisely what has happened in the present petitions where the next of kin could not access justice even in the local courts and the petitioners have taken up their cause in public interest. Our constitutional jurisprudence does not permit us to shut the door on such persons and our constitutional obligation requires us to give justice and succour to the next of kin of the deceased. Consequently, we have no hesitation in directing the constitution of a Special Investigating Team to investigate the cases that we have mentioned above.''