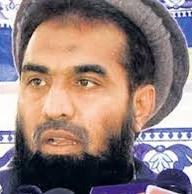 Days after a leading US Congressman demanded that Pakistan hand over Lashkar-e-Taiba commander Zakiur Rehman Lakhvi, said to be the mastermind of the 2008 Mumbai attacks, to India or to an international court for trial (See: Hand over Mumbai terror culprits, US leader tells Pak), a Pakistani court today declared his detention ''illegal'' and ordered his release.

Justice Noor-ul-Haq Qureshi of the Islamabad High Court described as ''null and void'' the notifications that were issued by Islamabad's district administration for Lakhvi's detention.

India reacted immediately, saying it is the responsibility of the Pakistan government to take all legal measures to ensure that Lakhvi does not come out of jail.

"The overwhelming evidence against 2008 Mumbai attack mastermind Zakiur Rehman Lakhvi has not been presented properly before court by Pakistani agencies. Pakistan should realise there are no good terrorists or bad terrorists," the home ministry said in a statement.

This is the second time that the same judge of the Islamabad High Court has ordered Lakhvi's release. An earlier order of the high court to this effect was overturned by the Supreme Court in January, which said the high court's decision was rushed.

On 18 December last year, the anti-terrorism court conducting the Mumbai attacks trial granted bail to Lakhvi, but authorities subsequently detained him under the Maintenance of Public Order (MPO) law after the development sparked angry reactions from India and the US.

However, judge Noor-ul-Haq Qureshi had suspended Lakhvi's detention under the MPO. Just before he was to be released from jail, Lakhvi was arrested on the charge of kidnapping an Afghan national several years ago.

Lakhvi, currently being held at Rawalpindi's Adiala Jail, and six other men have been charged with planning, financing and executing the terror assault on India's financial hub in November 2008 that killed 166 and injured hundreds.

On Tuesday, United States House of Representatives Foreign Affairs Committee chairman Ed Royce, leading a parliamentary delegation to India, had said that he has asked for Pakistan to hand over Lakhvi to India, or failing that, to the International Criminal Court in The Hague for ''crimes against humanity''.