New Delhi: India Navy chief, Admiral Nirmal Verma, is the new chairman of the chiefs of staff committee (CoSC), arising from his position as the senior most amongst the three defence service chiefs. He assumed his position on Friday taking over from outgoing IAF chief, air chief marshal PV Naik. 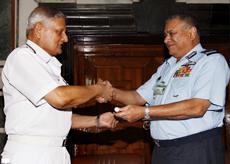 This largely ceremonial post fails to address pressing concerns about the lack of synergy between the armed forces and the defence ministry as well as between the Army, IAF and Navy itself.

The recommended creation of the crucial post of a chief of defence staff (CDS) remains unrealised even as the country celebrates the 12th anniversary of the 1999 Kargil conflict.

In the aftermath of the Kargil conflict, a comprehensive review of security undertaken by a group of ministers had recommended the creation of a CDS to provide single-point military advice, 'administer' the strategic (nuclear) forces, and promote 'jointness' among the armed forces.

"The functioning of CoSC has, to date, revealed serious weaknesses in its ability to provide single-point military advice to government, and resolve substantive inter-service doctrinal, planning, policy and operational issues adequately," the GoM report had warned.

Even earlier, the K Subrahmanyam-led Kargil Review Committee had held, "India is perhaps the only major democracy where the armed forces HQs are outside the apex governmental structure."