New Delhi: Sometime over the next couple of months India and Russia will sign another defence contract for the supply of five Russian Kamov-31 airborne early warning helicopters. The acquisition is aimed at bolstering the capabilities of the Indian Navy to detect airborne and surface-based maritime threats. 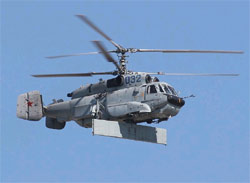 The proposal was cleared by the Cabinet Committee of Security (CCS) at a meeting on Tuesday, according to defence ministry officials.

The navy already has a fleet of nine Ka-31 helicopters, which are deployed on India's only aircraft carrier INS Virat and the Talwar Class guided missile stealth frigates of the navy.

They also operate from the navy's shore-based air stations.