New York City may become the first major city in the US to cap the number of Uber, Lyft and other ride-hailing drivers operating on public streets, as city officials are moving to cap the number of vehicles driving such services in an aggressive move to counter worsening congestion and low driver wages. 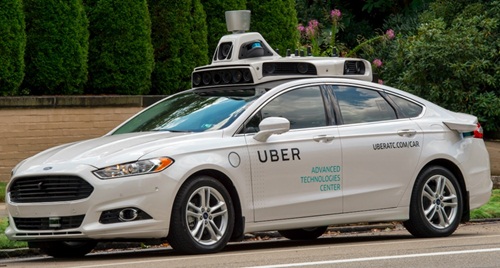 The legislation being considered by the City Council would make New York the first major American city to set a limit on ride-hailing vehicles, which in a relatively short period of time have transformed the transportation networks in cities across the world. Mayor Bill de Blasio, while stopping short of fully endorsing the proposal, suggested that the time had come to rein in the industry.
The proposal supported by the City Council speaker, Corey Johnson, would halt the issuance of new for-hire vehicle licenses, except for vehicles that are wheelchair accessible, while the city conducts a year-long study of the industry. The council may also limit the number of vehicles operating in an area and could decline to renew a permit if a “need” for service isn’t demonstrated.
It is the second attempt by New York City — Uber’s largest market in the US — to cap the company’s vehicles after a failed effort by de Blasio in 2015. Since then, the number of for-hire vehicles in the city has surged, rising to more than 100,000 vehicles, from about 63,000 in 2015, according to the city.
Johnson, de Blasio, and other elected officials have raised concerns about the decimation of the once-thriving taxi industry and the increasing gridlock on city streets. Questions over the impact of ride-hailing services have also become more visceral — six professional drivers have killed themselves in recent months, including three taxi drivers.
Critics say the city has to crack down because ride-hail vehicles are clogging the streets — there are now 100,000 for-hire vehicles licensed in the city, up from 40,000 in 2011 — as well as siphoning riders from public transit and depressing incomes for taxi and livery drivers.
New York’s strong stance toward Uber comes at a time when other cities are grappling with how to respond to the challenges posed by the remarkable rise of ride-hail apps. Last month, Uber won back its license to operate in London after agreeing to stricter regulations.
Is India listening?
The problem is on its way to becoming equally acute in Indian metropolises like Mumbai and Delhi, where traffic jams are no longer restricted to rush hours but are becoming a day-long phenomenon. There have also been protests by Uber and Ola drivers over low wages.
Unfortunately, the authorities in Mumbai, for example, are busy building flyovers and sea links for passenger vehicles, while completely neglecting public transport like buses. New York’s example should serve as an eye-opener, but it is unlikely that the politicians and civic authorities – despite their fondness for foreign ‘study’ tours – are paying any heed.
In New York, A series of proposals before the City Council — all seeking to tackle problems in the industry — would also move to set minimum pay rules for app drivers, a step that would make New York the first major American city to establish a pay minimum for drivers. The City Council could vote on the measures as soon as 8 August.
Johnson, a Democrat who became City Council speaker in January, said that it was clear that something needed to be done to grapple with the disruption in the taxi and for-hire vehicle industry.
“This is the plan that we came up with and in my heart I believe it’s the best path forward,” Johnson said in a statement. “Our goal has always been to protect drivers, bring fairness to the industry and reduce congestion. That’s what this proposal does, and it represents the broad outlines of what we think our next steps should be as a city to help the industry.”
Uber, setting the stage for what could be another fierce fight, immediately blasted the proposal, arguing that it would hurt its customers, especially those who live in the boroughs outside Manhattan, where the growth of ride-hailing services in neighbourhoods ill served by public transit helped them achieve a milestone and surpass yellow cabs in the number of daily riders.
“The City Council’s Uber cap will leave New Yorkers stranded while doing nothing to prevent congestion, fix the subways and help struggling taxi medallion owners,” said Josh Gold, a spokesman for Uber. “The Council’s cap will hurt riders outside Manhattan who have come to rely on Uber because their communities have long been ignored by yellow taxis and do not have reliable access to public transit.”
De Blasio’s office worked with the City Council on the proposals and Eric Phillips, a spokesman for the mayor, said City Hall would monitor the legislation and hoped that it would help drivers and decrease congestion.
On Thursday, as city officials began to discuss the cap, Uber released a new ad to oppose the proposal. The ad focused on the difficulty some New Yorkers — particularly people of colour — face in hailing a taxi. It shows vehicles vanishing from the app. “If the New York City Council gets its way, all of this could disappear,” the ad says.
MORE REPORTS