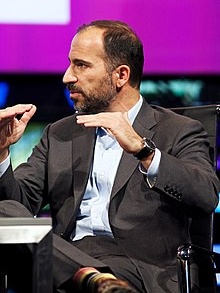 The selection capped a contentious search process as the ride-hailing company seeks to move past a turbulent period.

Khosrowshahi will succeed co-founder Travis Kalanick, who grew Uber into a $20-billion annual booking business last year before scandals forced him out.

Khosrowshahi emerged as the leading candidate from a field of three finalists over a weekend of Uber board meetings, said people who spoke on the condition of anonymity because the details were confidential.

A spokeswoman for Uber directors said they've chosen a CEO but declined to name the person, saying the board would inform employees first. Expedia didn't immediately respond to media requests for comment.

''The board has voted and will announce the decision to the employees first,'' the spokeswoman said in an email.

Iranian-born Khosrowshahi, 48, will take on the daunting task of mending Uber's image, repairing frayed relations among investors, rebuilding employee morale and creating a profitable business after seven years of losses.

He will also have to contend with the legacy of the pugnacious Kalanick, who was ousted as CEO in June after shareholders representing about 40 per cent of the company's voting power signed a letter asking him to step down amid growing concern over his behaviour and the behaviour of senior managers under him.

Khosrowshahi wasn't known to the public to be among the top candidates for the job.

Earlier on Sunday, Jeff Immelt, chairman of General Electric Co, said he was no longer in the running for the job. Meg Whitman, chief executive of Hewlett Packard Enterprise, had also been a leading candidate.

Immelt withdrew when it became clear that he did not have enough support, said two people familiar with the process. The board of directors and executives had instead been leaning toward Whitman.

But matters changed quickly over the course of Sunday afternoon, as directors and Whitman could not agree on terms in which she would take over as chief executive, according to The New York Times. Ultimately, the board decided on the third candidate, Khosrowshahi.

Choosing Khosrowshahi is crucial to returning stability to Uber, the world's biggest ride-hailing company, which has been without a leader since Kalanick stepped down. Under Kalanick, Uber changed the transportation landscape by offering people the ability to summon a ride through an app, and the privately-held company swelled to a nearly $70-billion colossus.

But Uber's future became murkier this year when the company was pummelled by scandal after scandal, including sexual harassment accusations in the workplace, a Department of Justice criminal investigation into some of its methods, and an intellectual property dispute with a self-driving car rival.

While Uber's business continued to grow, Kalanick's management style faced scrutiny and investors mutinied against him.

How much of an impact Khosrowshahi can have on Uber is uncertain. Kalanick remains on Uber's board, which has been riven with discord, especially between Kalanick and venture capital firm Benchmark, which is a major Uber shareholder, with a seat on Uber's board.

Both Kalanick and Benchmark had their own preferred candidates for a new chief. Benchmark also has sued Kalanick to try and force him off the board.

Running Uber will be no easy task. While the business is growing, the company has been trying to reform its workplace culture following accusations of sexual harassment.

Khosrowshahi, who has been president and chief executive of Expedia since 2005, has experience in a digital industry that, like Uber, affects offline life and the logistics and movement of people.

Based in Bellevue, Washington, Expedia has travel brands including Hotels.com and Orbitz. The publicly traded company is smaller than the privately held Uber, with a market capitalization of around $23 billion compared with Uber's private valuation of nearly $70 billion.

Khosrowshahi also joined the board of The New York Times Company in 2015, and previously worked at IAC / InterActive Corp.

At Expedia, Khosrowshahi has been an outspoken chief executive, since 2005. His family emigrated to the United States from Iran because of the revolution in that country in the late 1970s, so Khosrowshahi had a personal perspective on the executive order that President Trump signed restricting travel from seven predominantly Muslim countries this year.

Expedia, along with Amazon, became one of two technology companies to contribute early declarations to a lawsuit filed by Washington State's attorney general objecting to the travel ban.