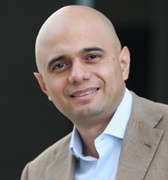 Tata Steel, Britain's biggest steel maker and Europe's second largest, announced in March that it planned to sell its Port Talbot plant in Wales and other assets, which together employs around 15,000 people.

Earlier this month the company said it had selected seven bidders to proceed to the next stage, without identifying who they were  (See: Tata Steel evaluating 7 expressions of interest for UK selloff). "Met Tata in Mumbai today to discuss #steel sales process. Several credible bidders in play. Determined to keep momentum & find right buyer," Javid wrote on Twitter after the meeting.

Amidst intense speculation on which of the seven bidders will make the cut to acquire Tata Steel's loss-making assets in Britain, UK business secretary's meeting with Tata Sons chairman Cyrus Mistry in Mumbai assumes significance.

The meeting, which is the second in as many months, was held at Tata Group's global headquarters Bombay House in Mumbai.

Tata Steel's board meeting on Wednesday is expected to finalise selection of the bidder and an announcement is expected.

Tata Steel is selling its loss-making British assets as a global oversupply of steel, cheap imports into Europe from countries, including China, high costs and currency volatility, make steel-making in UK a losing proposition.

The move has put pressure on Prime Minister David Cameron's government to safeguard jobs and the British steel industry, which is as old as the Industrial revolution.

Tata Steel's board is expected to discuss today  which of those bids would be shortlisted.

Tata Steel will also announce its quarterly earnings following the board meeting.