Tata Steel on Monday said it has received seven expressions of interest for its UK business, which is up for sale, adding that it has taken forward only those proposals which are for all of Tata Steel's UK business and not in parts. 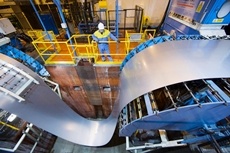 "We have been pleased with the response to the initial stage of the global sales process for Tata Steel's UK business. Today's announcement by Tata Steel Europe marks another important stage gate in this process. The expressions of interest received have been through a robust initial assessment process with inputs received from the UK government whose views have been considered by the board.

''We believe that the bids being taken forward offer future prospects of sustainability for the UK business as a whole. The sales process will continue as announced earlier in an expedited and robust manner to deliver greater clarity for all key stakeholders such as employees, customers and suppliers," Koushik Chatterjee, group executive director (finance and corporate) stated through a press note.

While the sales process continues, Tata Steel's business in the UK under the new leadership team continues to focus on the business performance, said Chatterjee.

In the next phase of the sales process, the interested parties will be given access to further business information and management team, the release said.

Tata Steel, India's largest steel producer, has been struggling to turn around its European operations since the time it acquired Corus in 2007, and is moving to sell its entire UK business.

In order to stop further financial deterioration, the company has decided to do away with its Ebitda-negative UK unit.

Recently, the company managed to sell off its 4.5 million tonnes-long product division to Greybull Capital for a nominal amount and is now looking to sell the balance 5.5 million tonnes capacity at port Talbot and Rotterdam for which it has received the expressions of interest (See: Greybull to buy Tata's UK long steel arm for £1 ).

"The deal with Greybull Capital should close by June first week and a new pension scheme is being worked out for this facility," said Harish Patel, national officer (metals and foundary) at Unite, Britain's largest trade union.