TVS Motor Company will roll out its first hybrid two-wheeler, which will run on a combination of petrol and electric motor, by December, while its first fully-electric vehicle will be in the market by February or March 2018, Venu Srinivasan, chairman and managing director of the company, said. 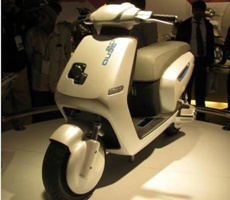 The two-and-three wheeler company has been working on hybrid and electric technologies for several years now, according to Srinivasan.

''While the hybrid vehicle will be rolled out by the end of 2017, the electric vehicle by February or March 2018,'' said Srinivasan. ''We have been working on an electric bike for over six years now.''

By 2020, a fifth of the two-wheeler market will comprise electric vehicles, Srinivasan forecast. ''Lithium-ion batteries are still a challenge because of the availability. But the falling cost of batteries will favour adoption of hybrid and EVs,'' he said.

The TVS chief said his company is also looking at cheaper alternatives to lithium technology that may result in batteries and vehicles getting cheaper. ''We are working with multiple agencies and we will have to commit investments in multiple technologies.''

While the lack of charging infrastructure is still a concern, Srinivasan said rapidly improving technology and the strong commitment by the government would propel hybrid and electric vehicles into the mainstream soon.

By December 2017, TVS Motor says it will be coming out with a hybrid vehicle that could run on both petrol and electric battery.

TVS Motor had started manufacturing and exporting sub-500 cc bikes for BMW's global market. During the second half of the year, TVS will roll out a 310cc vehicle on the BMW platform.

TVS Motor Company reported a 7 per cent rise in net profit, at Rs129 crore for the quarter ended 30 June. Its total revenue grew 19 per cent to Rs3,800 crore during the period.

The company has made a provision of Rs16.50 crore towards additional discount offered to dealers for clearing pre-GST stocks held as on 30 June at revised prices. Higher raw material costs also put pressure on costs during the quarter, said SG Murali, chief financial officer.

Post GST implementation, TVS Motor has reduced two-wheeler prices in the range of Rs350 to Rs1,500 in the commuter segment and up to Rs4,5 00 in the premium segment, depending on state-level pre-GST taxes.